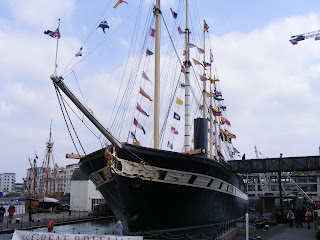 Last week was a busy 'fun week' out and about with sadly no painting achieved at all. However our trip to Bristol was superb.

I do love old ships and have visited all the usual suspects in Portsmouth Harbour, Victory, Warrior & the Mary Rose, frequently visit Chatham Dockyard and any visiting tall ships in Ramsgate harbour (The tall ships races when they stop there are quite a spectacular sight) One of my aims recently has been to re visit Brunels SS Great Britain which was in 1843 a great breakthrough in shipping technology with its super-size iron hull making her the biggest strongest ship ever built at the time coupled with a steam driven (1,000 hp engines)powered propeller. 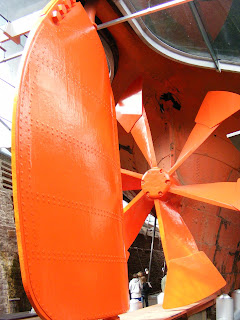 I last saw the ship in about 1972/73 (just after her return on a barge all the way from the Falklands) when I was 7 and have a vague recollection of a stern painted in gold and lots of scaffolding!! She has come on somewhat!!! 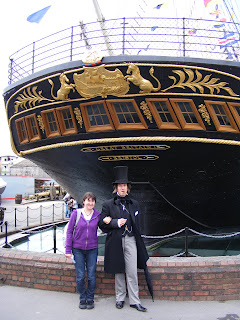 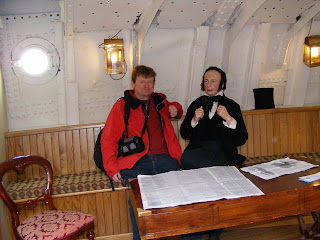 And so did I tho' he wasn't as communicative!

The SS Great Britain sailed around the world 32 times which amounted to more than1,000,000 miles. it was launched in 1843 by Prince Albert and made her first Atlantic crossing to New York in 1845 in 14 days and 21 hours. Soon after in 1846 the ship was run aground in Dundrum Bay off the coast of Northern Ireland and wasn't re floated until a year later. In 1852 The SS Great Britain made its first voyage from Liverpool to Melbourne carrying hundreds of emigrants. In 1856 she acted as a troop ship carrying troops to fight in the sepoy or Crimea War. Of great note being a cricket fan was the fact that the first England Touring Team to Australia travelled on board in 1861. there was no practice nets/facilities but deck quoits could be played!! Notably England won nearly every game of cricket played on that tour!!!!!....and very sadly not repeated since!!!

In 1875 the SS Great Britain made her final voyage as a passenger ship from Liverpool to Melbourne and was converted into a Windjammer with the removal of the engine and funnel so that more cargo could be stowed her power being provided by 3 tall masts and square sails. 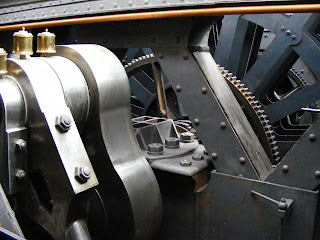 Detail of the steam engine 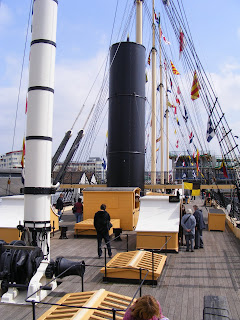 On deck view looking towards the stern from the bows 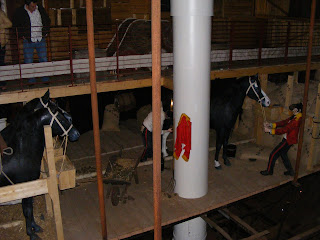 The ship is fitted out with mannequins depicting passengers on different sailings and all the equipment and victuals needed on such a trip. The picture above shows soldiers grooming the officers horses when SS Great Britain did troopship duty. 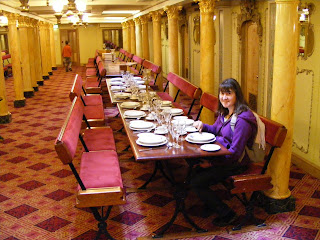 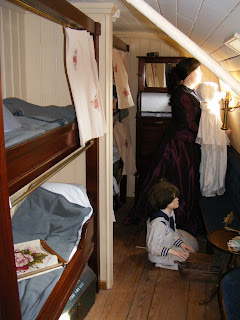 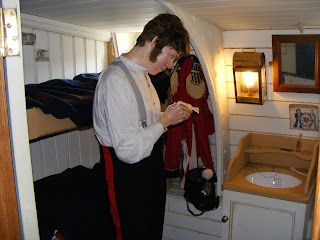 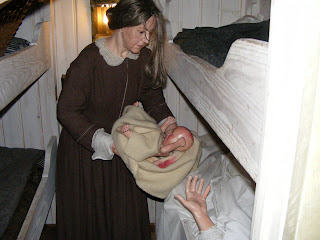 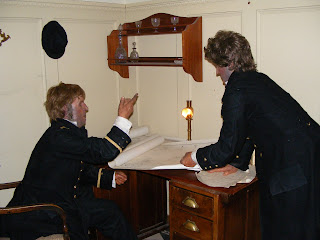 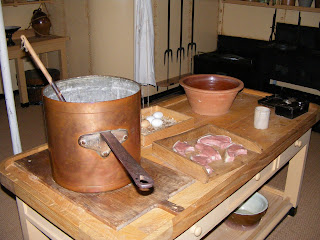 Ships galley which would have been staffed by 10 cooks, 2 bakers, 2 butchers and a storekeeper. Travelling to Australia took 60 days with no opportunity to pick up supplies. 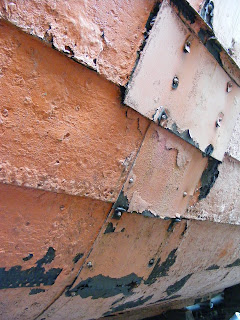 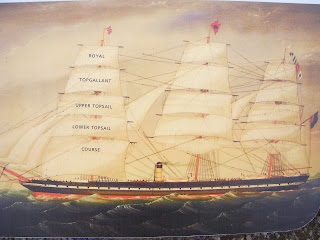 The SS Great Britain had a long working life remaining economic to run from 1843 - 1933. The last owners were the Falklands Islands Company who bought the ship in 1886 when she limped into Port Stanley badly storm damaged.For 43 years the ship was used as a floating storage hulk. In 1937 she was scuttled in Sparrow Cove. A naval architect Ewan Corlett refused to let such an important ship rust away and the plan to rescue her led to the return of the ship to Bristol in 1970 on a massive floating pontoon which was towed the 8,000 miles across the Atlantic!!


THis was an excellent visit and good value for money,see Brunels SS Great Britain for more details and visit if you havn't already! 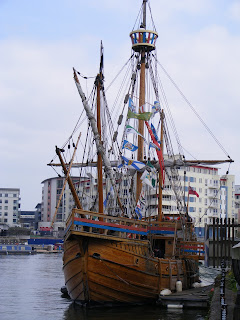 Over 500 years ago John Cabot and his crew set sail for Asia aboard the original Matthew hoping to trade goods and commodities with the people who lived there.

However, he finally arrived on the coast of Newfoundland and therefore was the original discoverer of North America, not Christopher Columbus as most people believe.

Today the replica of the Matthew sits proudly in Bristol harbour for all to see. The general public are able to board the Matthew as well as embark on trips around the harbour.

In 1997 the replica Matthew followed the same course as John Cabot in 1497 and sailed across to Newfoundland. It carried the same number of crew members as the original and took the same and used the same amount of time to complete the crossing. 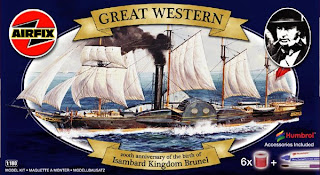 Its not the SS Great Britain but Airfix did a model of his 'Great Western'and its in the loft somewhere!!!!!


Built at Bristol and launched on 19 July 1837, the Great Western was a timber vessel, driven by paddles, with a 2,340 tonnes displacement. It started out across the Atlantic ocean, with a handful of passengers, on the 8 April 1838, arriving in New York 15 days later.

In 1847, the Great Western was purchased by the West India Mail Steam Packet Company and remained in survice for a further twenty years. In 1857 she was broken up in London.

Minifigs 'The Buffs' in progress!! 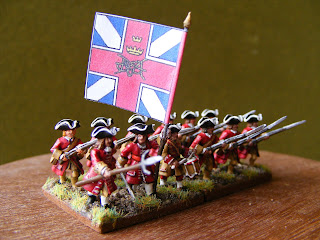 At last I return to the abandoned WSS 15mm project. Not being 100% over easter with dodgy tum, I havn't spent much time crouched over the painting table! But when I did have a foray with the paintbrush it was to endanger my eyesight further with these 15mm fellows.Living in East Kent my first regiment has to be the legendary 'Buffs' 3rd Regiment of Foot.

The photo shows 2 complete bases (following Wills rules via Steve the Wargamers invaluable WSS pages, 6 figs per base 30mmX30mm)The standard has just been glued in place...although as can be seen from the photo I removed the top half of the Minifigs Ensigns flagpole drilling out the hand (in 15mm mad eh!) and replacing it with a bit of wire long enough to take the flag. I super glued the 'spike' on top & will touch up the paint & add a couple of red tassles from fine cotton.

The remaining 10 tricornes are currently 'under the paintbrush' and then I must confess to being a 'right muppet'!! when I ordered the figures last year I forgot the Grenadiers as 2 will be needed to represent the Grenadier company!!! So have just ordered these plus a few other bits from Minifigs as it's best to keep the different ranges seperate in their own regiments so the height disparity etc doesn't look obvious (Black hat Grenadiers I have are bigger overal & different style). The Black Hat cavalry are superb but much larger than any other range....just look at Steve the Wargamers pages to see for yourself.

Just before Good Friday my Warlord Games ECW's arrived together with Boltaction miniatures WW2 Tommy's on bikes I just had to have....as you do...plus an easter egg from those kind folk at Warlord games!!! ...wow now thats the way to keep customers the human touch. Unfortunatly its still in its box due to aformentioned bug! 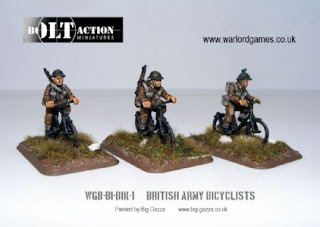 We had a quiet easter visited the Edwin Lutyens 'Salutation' House & Gardens at Sandwich on easter sunday with Hazels family and entertained my folks later in the week. 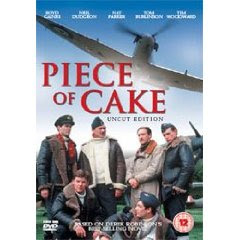 I did complete watching 'Piece of cake' the ireverant depiction of a Fall of France/Battle of Britain Squadron adapted by LWT and first shown in 1988, from a book by Derek Robinson. The story is absolute trash but the flying sequences (in the wrong marks of spitfire of course!) are awesome....and they would be with Ray Hannah at the controls. Ray 'Shooting the bridge' in a spitfire was a memorable bit of footage. 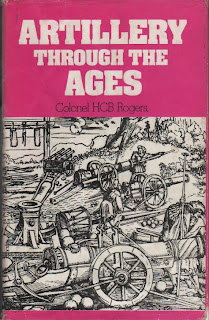 I caught up with a bit of reading also including a fun fictional novel by Guy Walters 'The Occupation' set on the Channel Islands in WW2 and picked up a few second hand books including a useful reference on Artillery 'Artillery Through the Ages' by Colonel HCB Rogers published by the Military Book Society in 1971. It does what is says on the cover! Describing the development of Artillery in sieges, in the field and at sea from the first certain record of ordnance in the city of Ghemt in 1313 to WW2 with an interesting further chapter on Rocketry.

I just hope that the SH book turns up soon and the Brigade Models Belgian Cavalry although it's not as if I havn't got any other projects on the go!......... must undercoat my Perry Riflemen, stick together a few Perry French & British Infantry get a few aircraft kits on the go.....it is 'mad' at the moment in the past couple of years so much new stuff has been released in wargaming and aircraft modelling terms it is absolutely impossible to keep up, a point one of my favourite blogs by good old Legatus has made well complete with picture of his 'lead mountain' (& Howards Way DVD...less said about that the better!)
Posted by Fraxinus at 22:41 1 comment:
Labels: Books, DVD's, Wargaming and Modelling in general, WSS 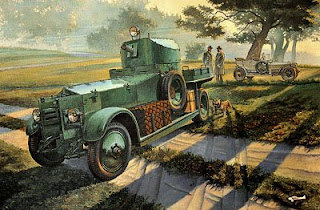 Well a week has passed without posting. This was due to huge amounts of work as is common with many at this time of year with the end of the financial year...but it hasn't just been financial stuff but parish liaison, bid writting, Service Level Agreement Monitoring, funding panels etc etc etc this has meant weekends have been absorbed into the working week and so the hobby has suffered & the garden, allotment etc although Hazel has got me away from the PC to go on relaxing bike rides. Easter is on the horizon and some days off 'hurrah' and perhaps the occasional bit of time to put paintbrush to a model figure or two.

I am pleased with my dedication so far in keeping to the main project of painting Great War Belgians and this will continue with more of a production line approach in future months although I have ordered some of the new cavalry from Brigade Models...which will take me ages to paint!! 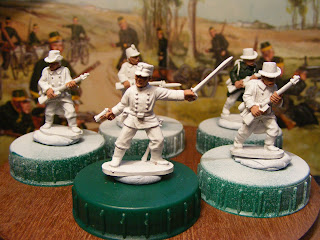 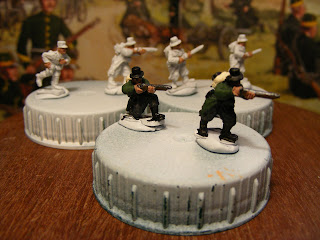 also some Emahar plastic Vikings,Warhammer Dark Elf Cavalry (Aim to complete a 1,000 point army to fight work colleague) Great War Brits including the 'Charleys War' figure from Musketeer and the 'Combat Stress' charity figure sculptered by Soapy via 'Figures in Comfort' and ....nervously looking unwanted on the outer reaches of the painting table are the 'Buffs' partially completed 15mm Minifig Marlborough types...I must get back on track with these. 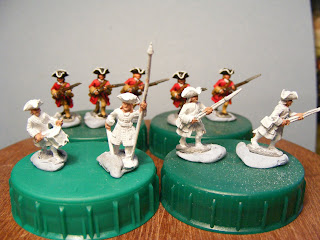 The picture at the head of this article is of Rodens recently released 1:35th scale British Armoured Car one of my favourite vehicles of all time & one I will have to make time to build although have not built any armour in this larger scale for some years. Will's Wargames Blog is displaying some nicely built aircraft at the moment & with my flying friend visiting in a couple of weeks to 'commit aviation' in the skies of Kent no doubt I will be distracted into sticking plastic aircraft together again. 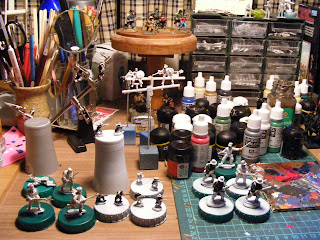