The Sutlej Gun - Captured Trophy of the Sikh Wars 1846 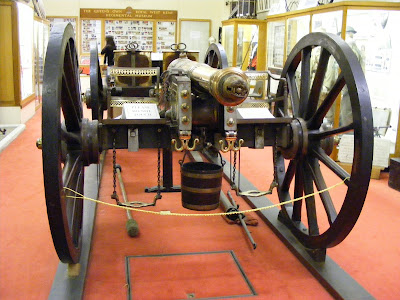 The 50th became 'The 50th (The Queen's Own) Regiment' in 1831. Becoming a Royal Regiment it's facings turned from Black to Royal Blue. They saw much action in India facing the Sikhs in 1845, and fought several battles culminating in Sobraon in 1846. Here the 50th played a decisive part in defeating the enemy, charging their guns to the cry of 'Make way for Her Majesty's 50th!' They captured a Sikh colour, but they came out of the engagement with a subaltern in command and half the regiment casualties. 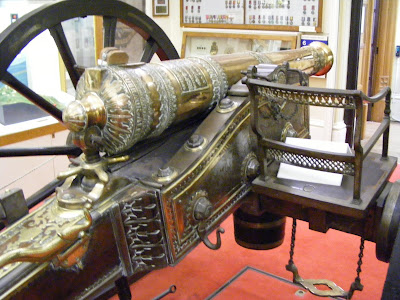 This Sutlej Gun which is the centre piece of the West Kents Museum (The 50th being a parent regiment) was manufactured in Lahore, India in 1838 and is one of a pair presented by the Directors of the East India Company to Field Marshal Sir Henry Hardinge who was Commander in Chief and Governor General of India. He had been commissioned in the 50th in 1798. 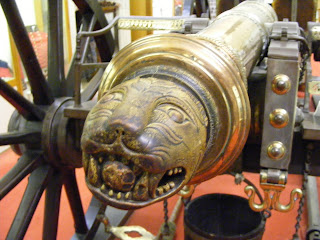 Six of these guns are known to survive 2 were presented to Queen Victoria and 2 to Lord Gough. The other gun presented to Lord Hardinge is now on loan to the National Armouries 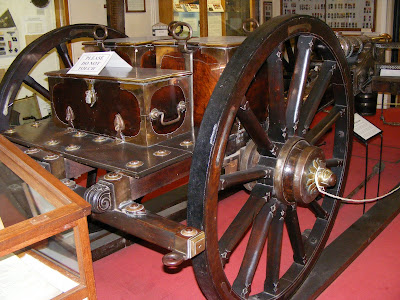 The workmanship on these pieces is incredible with beautiful detail not something you can usually say about a weapon of war. 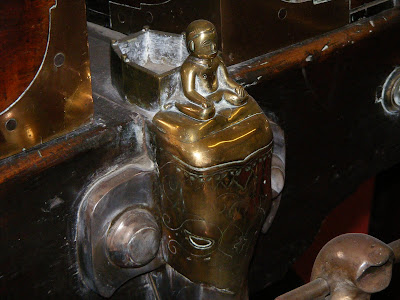 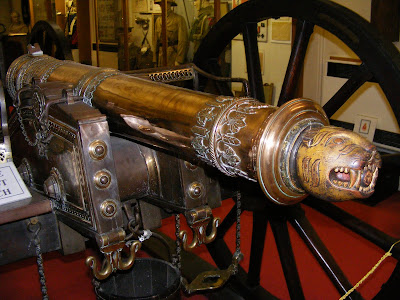 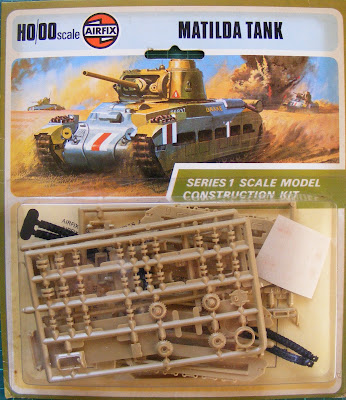 Keeping to the WW2 desert theme the Airfix Matilda Tank is this weeks 'classic kit'. Released in 1973 this was always one of my favourite Airfix tank models probably due to the slightly wacky desert camouflage scheme. I had to get this example off e bay for my collection as I wanted a 'period' blister pack example. It was released  later on in 2 different boxed examples, although of all the packaging Airfix has used over the years surely this was the best for 'series 1' you could see what you were 'in for'! Also the clear plastic was very useful for glazing vehicle & house windows!! 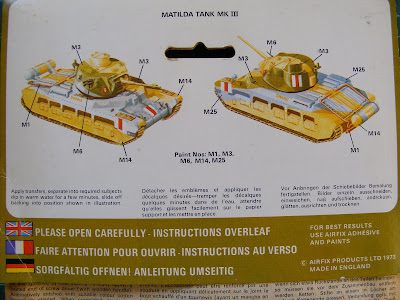 Currently this kit is available in the Airfix range as a Matilda 'Hedgehog' an adaptation of the standard tank with a 7 spigot 'hedgehog' naval mortar as was developed by the Australian Army. Not having a copy of this version not sure if you just leave the mortar off to create a standard Matilda no transfers are supplied for this though. See Henk of Hollands excellent website for more info and cybermodeller online for a useful review

One of Kent's Military Museums is celebrating its 50th year of being open to the public this year. A few years ago the last CO & curator died and the collection being based in Maidstone Museum was handed over to the Museum & Borough Council to run & administer. In the current day and age of Budget cuts & credit crunch threats to the public sector this could be a worry. However Maidstone Museum won a bid from the Heritage Lottery fund to expand its display area which was desperatly needed, as although it is the Museum of Maidstone it also in all reality  the 'Kent County Museum' with collections from all over Kent also given display space ' from Dinosaurs to the best Japanese collection outside of London'! 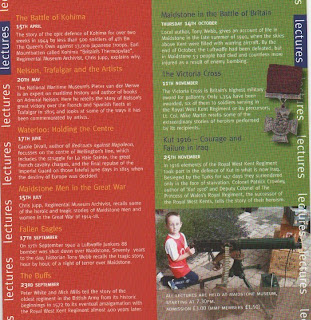 While the redevelopment of the museum will take place over the next couple of years and affect availability and display of some material, the West Kent's room in the museum will remain open and indeed much is planned to celebrate the regiments history & the military history of Maidstone.

Now as my scanner isn't coping with the leaflet very well I will post & advertise each of the events on this blog and will look into redesigning this blog to enable anyone to access information on Kent Military Museums & military sites of interest. I wil probably start a seperate Kent Military History blog and link from Victory V & use it to provide information for visitors to the County.

Also on the museum 'breaking news' page is the following article :
Somme to Staplehurst Walk

A group of five local men will be undertaking the challenge of walking approximately 150 miles from the Somme in France back to Staplehurst in Kent to raise money for the Help the Heroes Charity. This event is registered with the Help for Heroes charity and will take place between 10th April to 17th April 2010. One of the men taking part is a descendant of Thomas Harris whose Victoria Cross medal is on display in the Queen's Own Royal West Kent Regimental Museum. The men taking part themselves have 29 years service with The 2nd Battalion, the Queens Regiment.

The event is listed on the Help for Heroes website in the national events/Kent section. Reading this link made me aware what everyone is doing for the charity perhaps us Bloggers should think about some kind of blogging event .....perhaps a sponsored blog day where people who read our articles donate via Just Giving towards the Charity? Thoughts??

If you would like to make a contribution by sponsoring the Somme to Staplehurst event, then this can be done by the Just Giving website.
Posted by Fraxinus at 13:04 No comments:
Labels: Kent History, military History, Military Museums 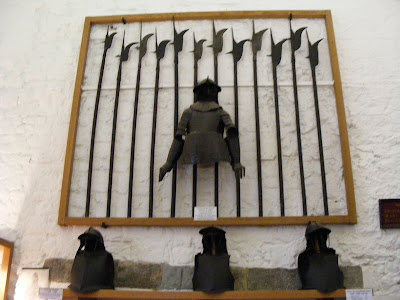 Westgate Tower Canterbury famous in its own right for being the first defensive structure built (1380)specifically for defence with guns has an interesting collection of ECW armour on the walls of the main chamber. now as the museum is threatened with closure next year due to Canterbury City Council Budget cuts I thought I should post some pictures....just in case!
Canterbury was occupied by Parliamentary forces soon after the outbreak of the Civil War in August 1642. The town muskets were repaired, the city defences strengthened and new supplies of gunpowder bought.
Colonel Sandy's troops were deployed in the Cathedral, despoiling images, monuments and service books. Then encouraged by Richard Culmer - a local churchman known as Blue Dick - they fetched poles to attack the stained glass.
'Rattling down Becket's glassy bones'
Real fighting broke out on Christmas Day 1647 when the mayor tried to enforce Parliament's ban on the celebration of Christmas - along with other superstitous festivals. A thousand citizens rioted on the streets in the Royalist cause.
Parliament sent General Fairfax with 3000 troops to canterbury, where they broke down the gates and breached the city walls in a show of strength to restore order.
On the King's execution in 1649, the City duly replaced the Royal arms with those of the Commonwealth in the Guild Hall and dined with Oliver Cromwell  on his visit in 1651.  (text from museum display, Westgate Towers) 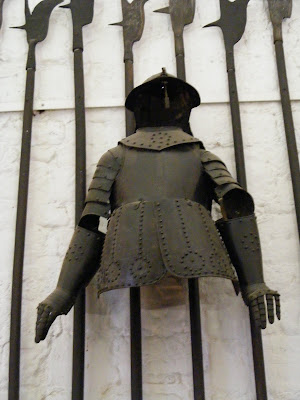 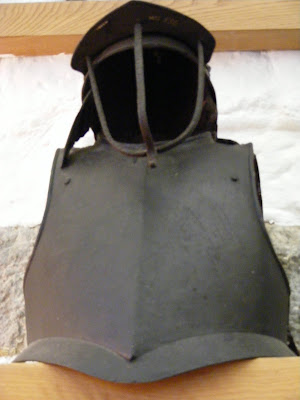 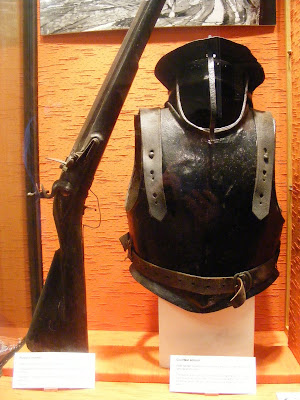 Civil War armour
Steel helmet, breastplate, and back plate worn in the 1640's by a light cavalry trooper.
The helmet is of high quality workmanship with a fully articulated neck guard - a 'lobster tail'. The breastplate is the heavy type known as 'siege-weight' , which gave extra protection to the wearer. 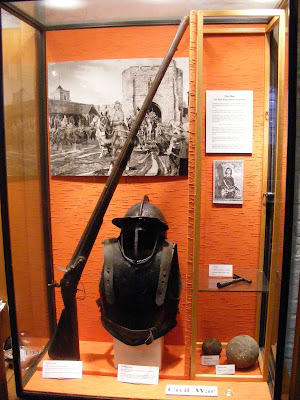 Flintlock Musket
Used in Canterbury in the Civil War Period
Wooden stock renewed in the 1680's, as was quite common
The letter 'C' stamped on the stock stands for canterbury City armoury 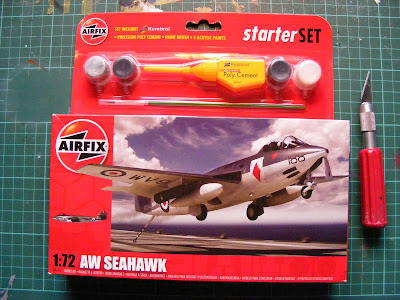 See Britmodeller forum & web site for kit bashers they are doing a group build (kit bashers like working on a designated Theme & posting the results on the site within certain guidelines) I picked this one the 'Airfix Starter Set' group build from the Airfix facebook page. What a great idea !!return to our roots and build a basic model 'basically!' with what comes in the starter set which means no airbrush but you have to use the 'hairs on the end of a stick' (us dablers in wargames figures are used to this) supplied in the starter set, no aftermarket decals or fancy fillers, glues, Halfords plastic primer (my personal worry!) etc. So lets return to enjoying building kits without the 'angst' of adulthood perfection anyone else willing to give it a try????? The challenge is down!! They start the build on 2nd April finishing 1st May join up for free and declare here or just do it and post on youre blog ...or both. Even if you havn't sniffed tube cement for years give it a go!

I suppose to be authentic build it in a rush on a saturday afternoon after lunch, dont let the glue or paint dry and decals on by tea! with nothing more intoxicating than a glass of squash & a club biscuit at 4pm!

I've gone for an AW Seahawk its only got 4 paints! & you can't supplement, but any plane,ship, tank car etc model produced as a starter set qualifies.
Posted by Fraxinus at 16:23 2 comments:
Labels: Kits of Nostalgia, Model Kits 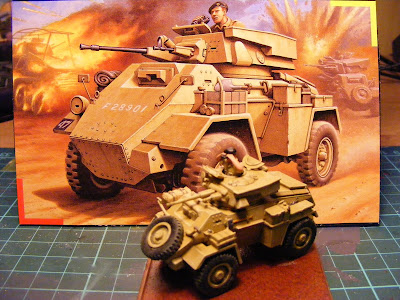 The excellent Matchbox Humber Mk II armoured car kit from the 1970's Pk -75 in Matchbox's 'purple range', this one is a Revell recent re-release, Great little model a joy to build & my favourite finish is the desert scheme fun to weather with highlights via the good old drybrush. Review of kit at miniatures forum and statistical info on the vehicle at wwiivehicles 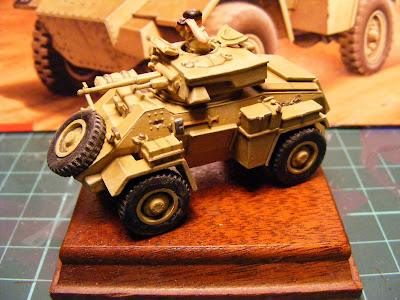 This kit was great fun to build taking only a couple of days, the time delay only to let the glue dry. Anyone could 'go to town' on covering the kit in 'stowage' as was common practice especially in the western desert but I just kept it simple making a nice addition to my western desert forces. 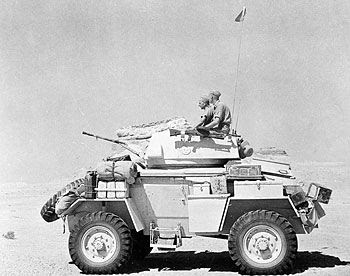 A Humber Mk II armoured car of the 12th Royal Lancers on patrol in the Western Desert, 10 August 1942 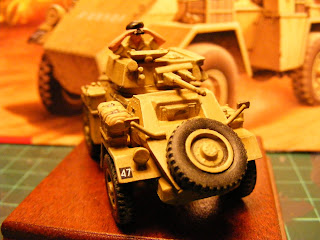 Ok memory lane article here and the first in a weekly series on vintage kits. I am not a huge fan of Luftwaffe aircraft except for the FW190 and the more bizare designs. The Fw189 always captured my imagination probably due to the fantastic box art as seen here from my collection of vintage kits. The FW189 was released by Airfix in 1969 and the kit comprised of 67 pieces from pilot to pitot tube!The Fw189 was a reconnaisance and army cooperation aircraft mostly used on the Russian front, 800 were built and it also performed light bombing duties. As was usual German practice the crew were grouped together and in a cockpit with considerable glazing which while useful for reconnaisance I wouldn't have fancied sitting there while being attacked by a Yak fighter. With a maxspeed of 217mph you wern't going to outrun much!! My copy of the kit is in grey plastic, very nicely moulded with 1 decal option I presume an eastern front machine and the kit is prestine and in my favourite box (serious Airfix collectors go mad on what version of the box the kit is in!) with pictorial 'adverts' around each side for other kits in series 2. These included the Swordfish, Hunter (in black arrows scheme),Bronco  and Harrier.

Good copies can be obtained at e bay or wait for this years re release (That will be in a modern red box though!) if you want to glue it together. I think the model will stand the test of time and reasonably comparable to the Italeri version.
Posted by Fraxinus at 19:48 3 comments:
Labels: Kits of Nostalgia, Model Kits
Newer Posts Older Posts Home
Subscribe to: Posts (Atom)