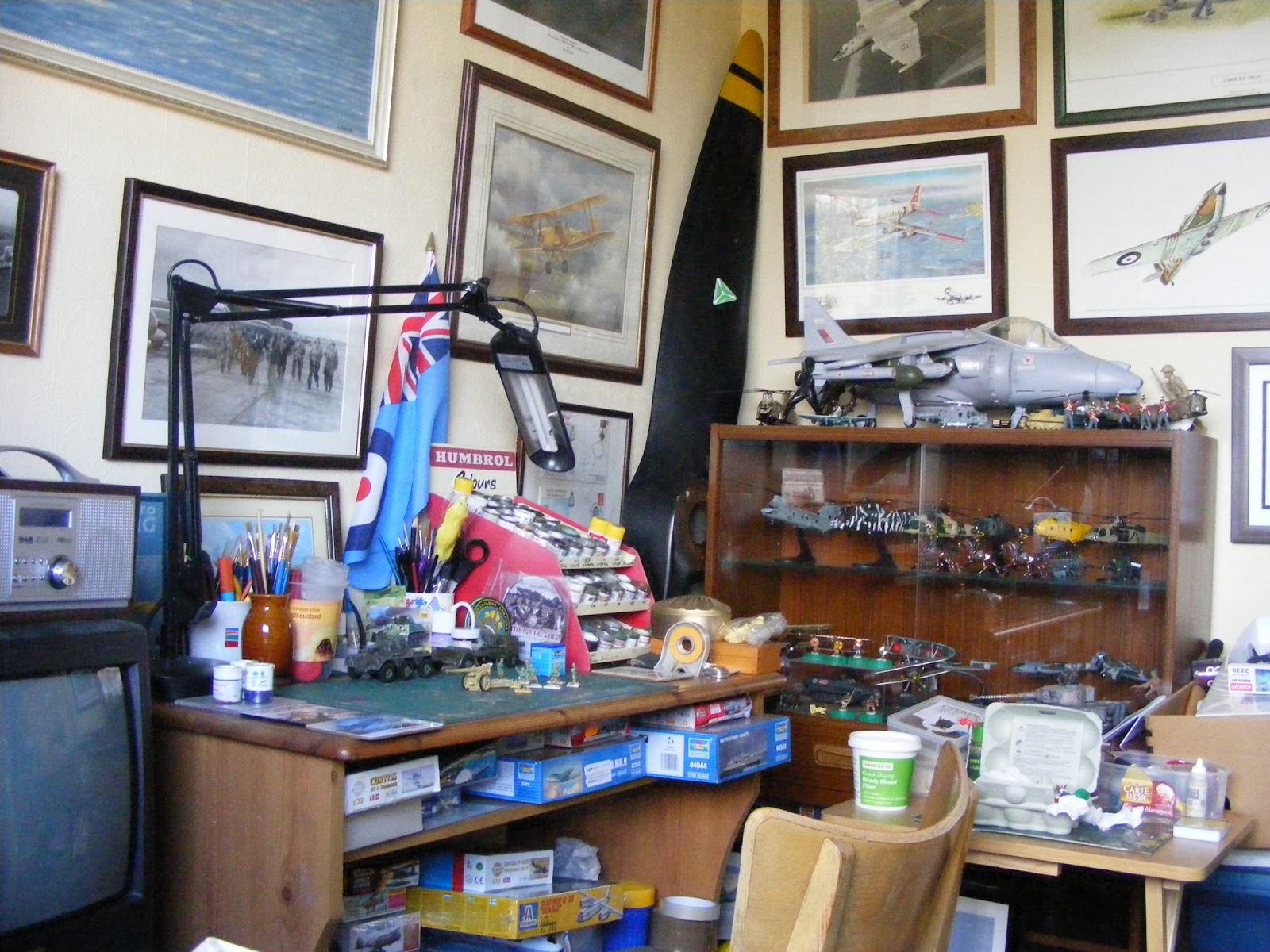 Have finally completed sorting out the back bedroom as the 'Den' and the main scene of modelling operations from now on. My other domain the 'study' where the damned computer lurks is the smallest bedroom full of display cases and military books, not much room for modelling and painting little soldiers! The upstairs landing has the aviation library...and these need cataloging and put in some sort of order. Not sure if its the change of profession into teaching which is making me more ordered or the fact that chaos has reigned for long enough! 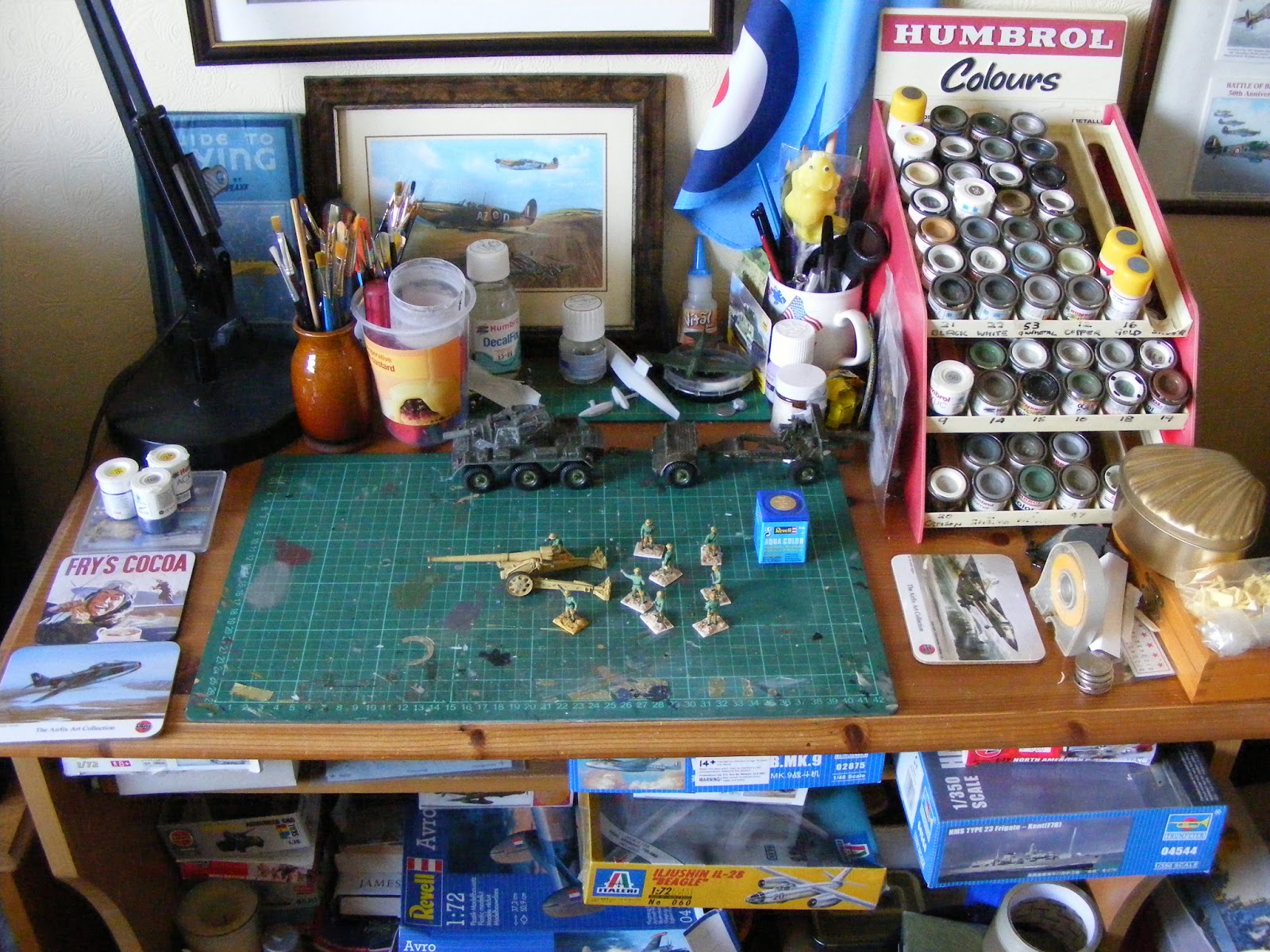 A few other blogs have shown their new paint racks.....mine is an old Humbrol shop counter display rack I saved from being 'skipped' when the local hardware store closed a few years ago.Most of my paints live in the 'acrylics' toolbox or the 'enamels' toolbox. Currently underway and nearing completion are some Italian WW2 artillery and Napoleonic French Foot Artillery....the small table is the 'basing' table. 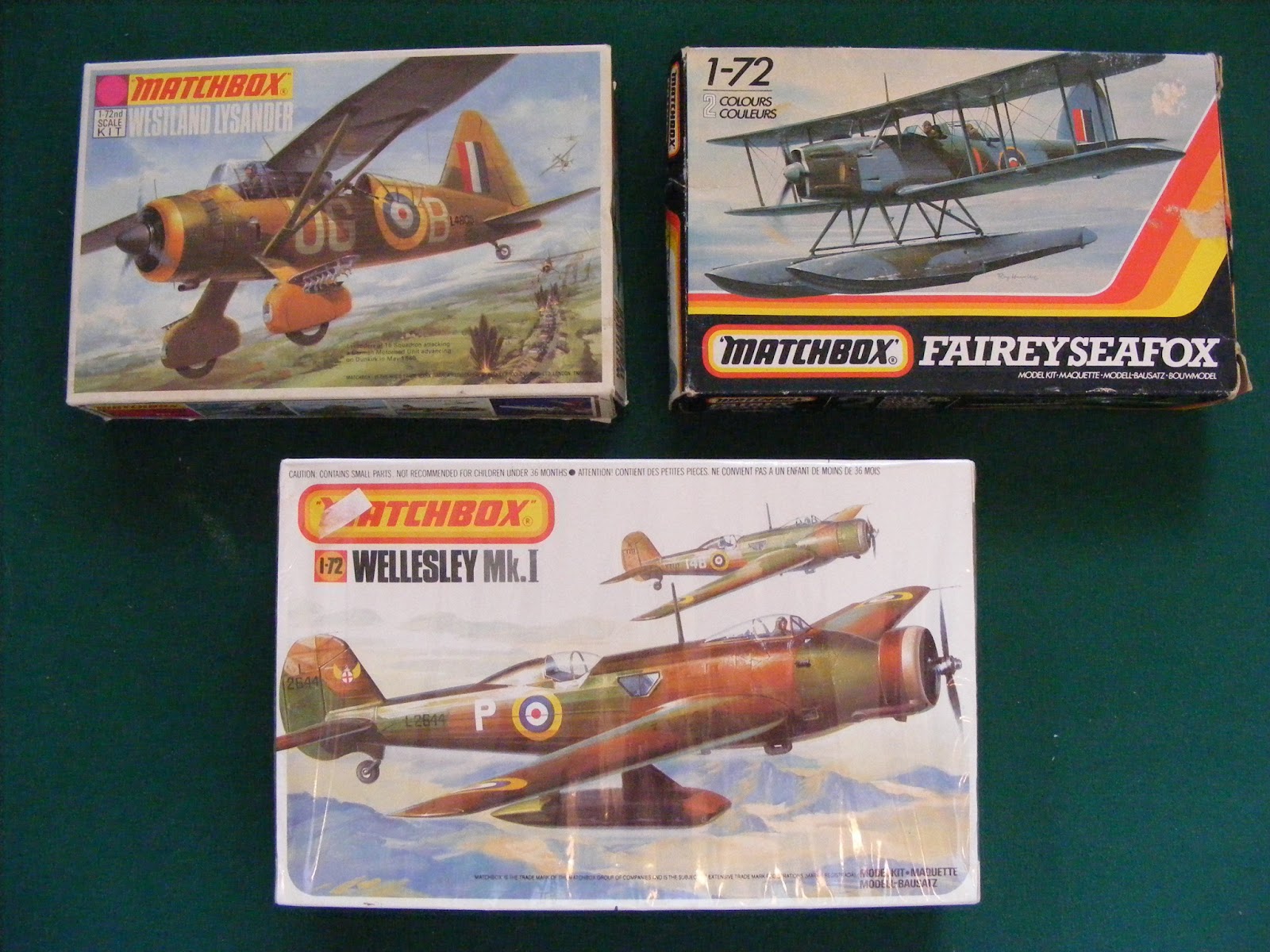 The low point of the day was Brentford failing to make automatic promotion to the championship...the on loan striker from Fulham missing the all important penalty...although amusingly spell checker recommends 'shameful' for Fulham! The high point of the day was the visit to The Maidstone Toy & Collectors Fair where I managed to buy the above Matchbox Kits for £10. 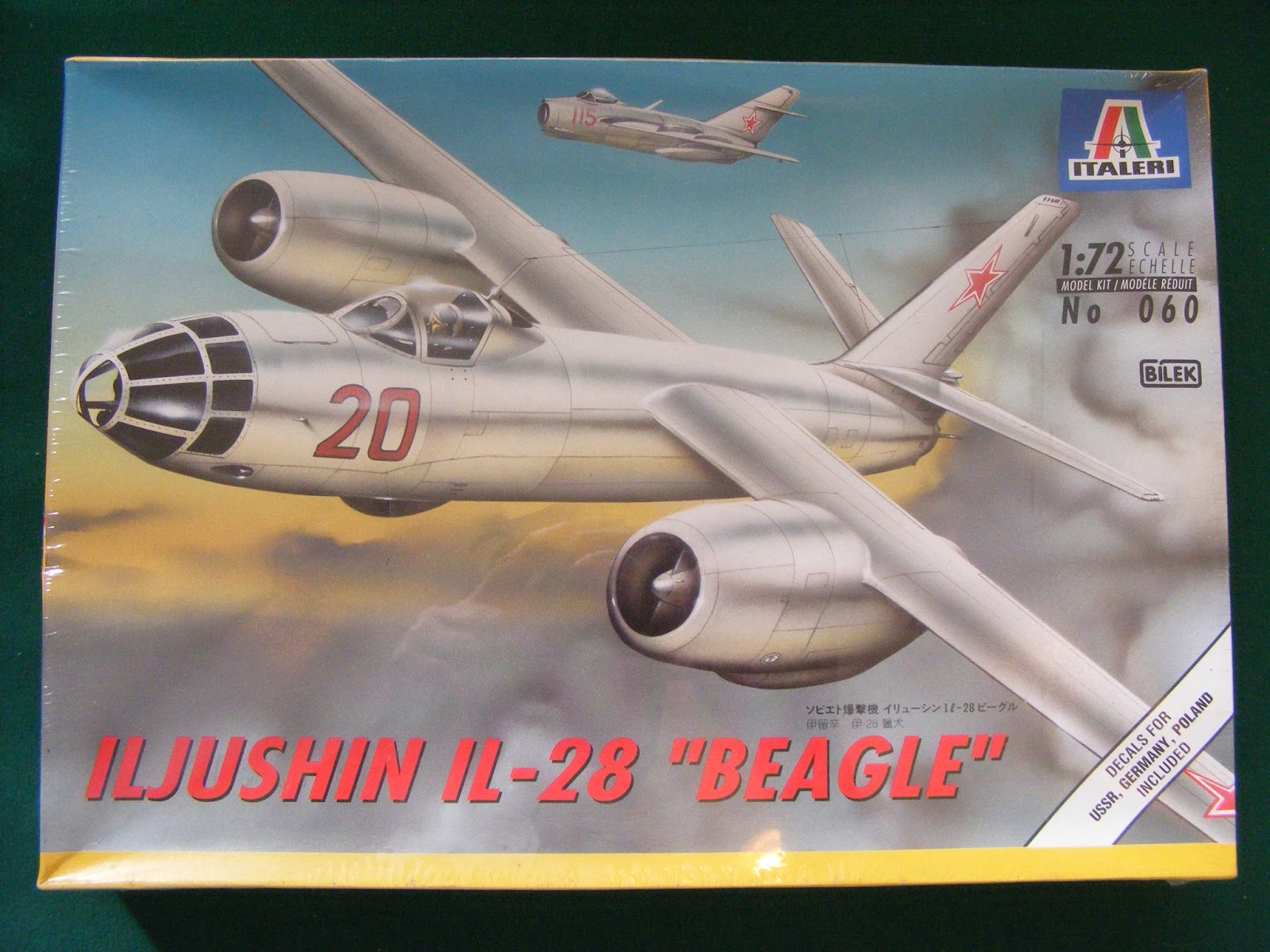 Also an Il-28 for a £5! Kits do not often feature at Toy fairs where diecast buses cars etc and trains rule supreme so sometimes a bargain can be had. 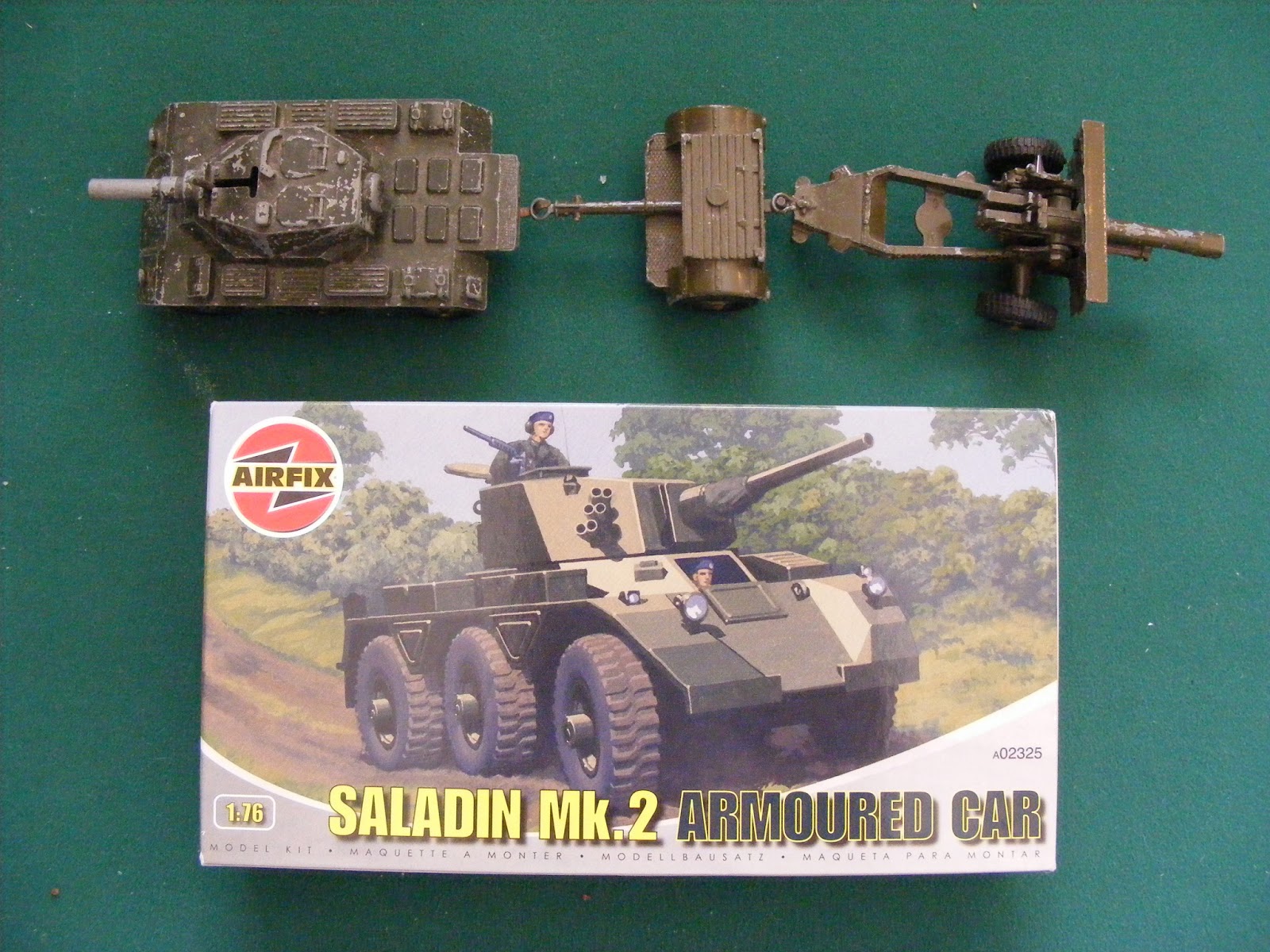 Inspired by the article in the latest issue of Miniature Wargames 'A Saladin for Unit' I also picked up the old JB models kit boxed by Airfix and the Crescent Diecast as mentioned in the article to do a restoration on. Not sure if in reality the Saladin ever did tow limbers and guns but it will be a fun little project!
Posted by Fraxinus at 19:14 5 comments: 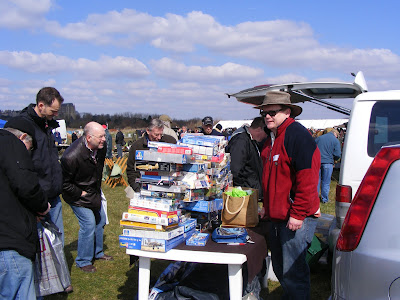 The mobile model shop did well! With the weather recently I was in much trepidation about this years Aero Mart and would it be worth attending.Although visitor numbers only picked up slightly on last year I sold 60 + kits which will pay towards a new pair of glasses to correct my ruined eyesight gained from trying to paint small objects and a camping holiday. 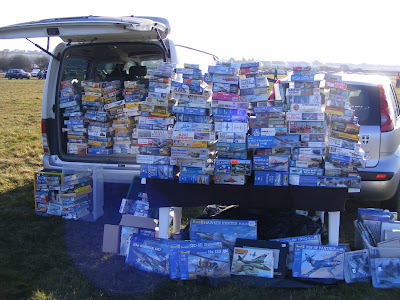 A bit of an into the sun shot but it shows the stall set out to attract buyers. I was very pleased that all my regulars of the past few years turned up and we 'chewed the fat' about latest models, aviation and the aeromart in general. I was very pleased that a follower of this blog David made an appearance and asked if we had sold the Zulu's yet!! a pleasure meeting you David and I look forward to seeing some painted AC W's  in the future. 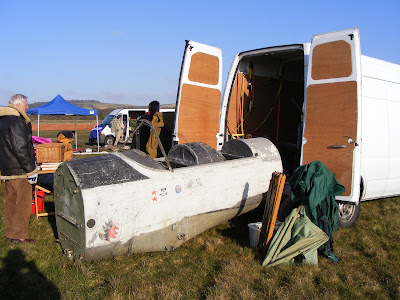 Some stalls were selling 1:1 scale models! Can anyone guess what this cockpit section is of? It was sold by the end of the day and was just a shell but I expect it will be renovated to turn up at a 'cockpiters show' perhaps at Newark Aviation Museum. 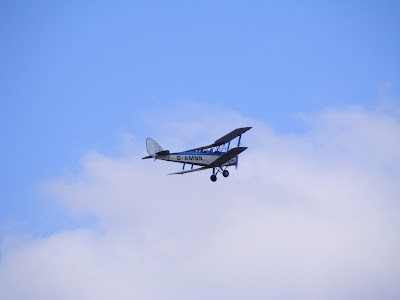 The show basically takes place at the end of Shoreham's runway and it was very entertaining with Tiger Moths, Stampe's, 2 Chipmunks (1 in Portuguese colours , v Nice), Bulldog, Cessna's & Pipers galore taking off and landing. 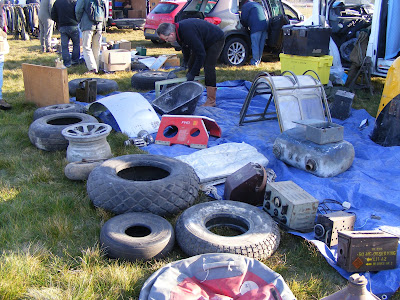 More bits apparently the Heritage Aviation guys from Biggin Hill were buying parts for their fleet of Spitfires/Hurricane. Anyway the Airfix Gossip at the show is that the re tooling will continue for most of the old Airfix Catalogue with a special emphasis on D Day next year. Also the heavy hint is that they will be concentrating 1/48th efforts on British 50's-60's jets ...so the Sea Vixen and upcoming Gloster Javelin are the tip of the iceberg......lets hope for all marks of Meteor, a decent 1/48th Hunter and a Scimitar! The design team at Airfix are now all very much aviation fans this is why the accuracy is getting better. 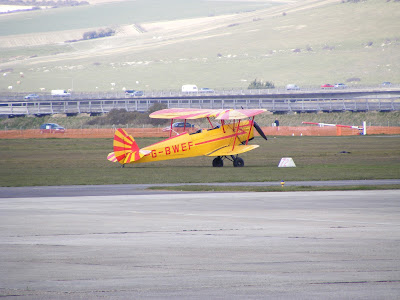 The only really annoying thing about the show is it has a car boot mentality amongst many stallholders who get there at 7.30 am and start packing up by midday....which upsets quite rightly the paying public who are allowed in at 10am. We were one of the last stalls to go and took extra money because we stayed. Above is the Tiger Clubs Stampe which was visiting the airfield from Headcorn. 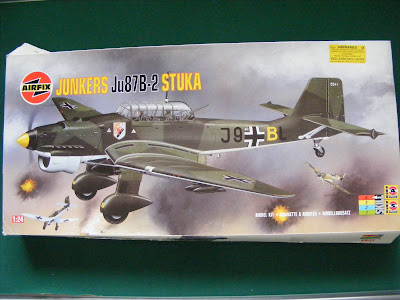 The only trouble is at shows you are tempted as well but only 3 kits were bought (60 + sold not a bad ratio!). I never have had the superb 1/24th Airfix Stuka and it was going very cheaply & still 'bagged' inside. 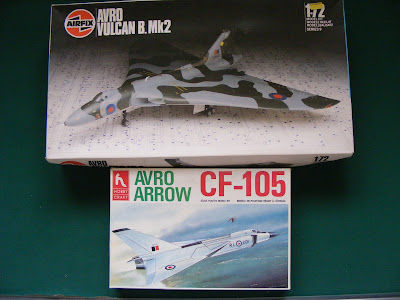 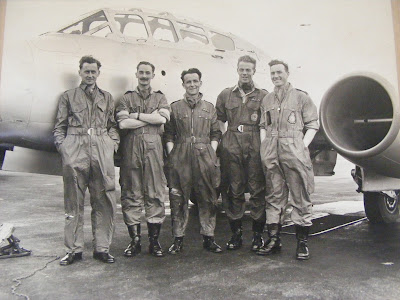 This was the star purchase a superb photo of '50's chaps' standing by their Gloster Meteor T7 trainer a large photo mounted on card with the Gloster Aircraft Co, Ltd Hucclecote Glos. stamp on the back Photograph by Russell Adams. 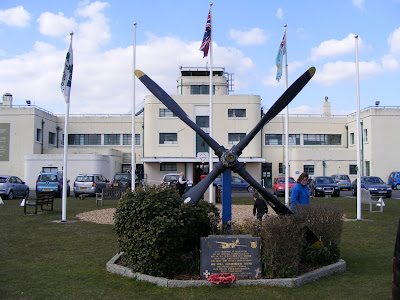 Shoreham Airport terminal building  is art deco in design from the 1920's and is used in many film sets. The propeller is from a B26 Marauder. 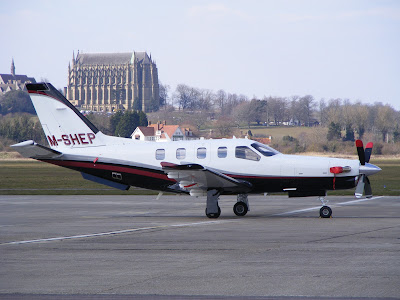 This is a Socata TBM-850 (I had to look that one up!) from the Isle of man with Lancing College behind on the hill 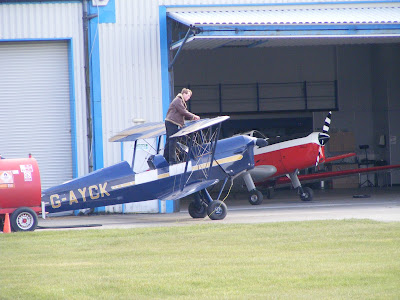 This was the last photo of the day as I left to make my weary way home to Kent..... And those Zulu's well they came home too! 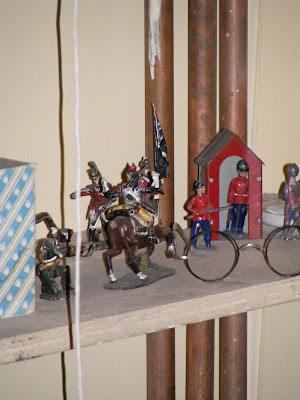 That was Saturday, on Sunday we had a family day out and I noticed that a famous fictional character had a model soldier collection at 4 Privet Drive! 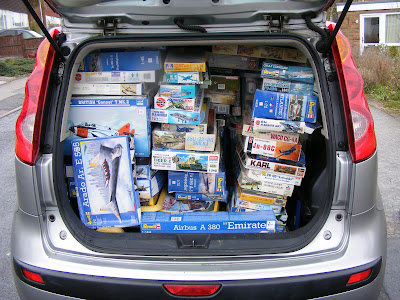 Almost loaded for the annual bash at Shoreham Aero Jumble on Saturday not much space left, its the first time I've loaded the car for this event during snow flurries! BBC weather promises 8 degrees and Sunshine......hahaha 2 thermos flasks, gloves 4 fleeces etc packed! Tonight will be spent at a friends parents in law in Ditchling, Sussex so most of the profits will be drunk before the sale! 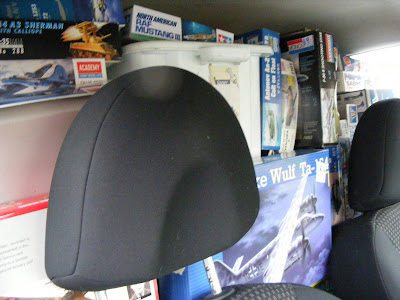 Last year I was hit from behind by a B17 on a roundabout .......normally this would be fatal however being only 1/72nd scale I survived! Note another B17 is poised to repeat the event. The main problem at aero jumbles is not to return with more than you came with ...last year I added a print on Hurricanes taking off at Kenley, a copy of The Lightning Boys personally signed by Squadron Leader Roy Colebrook who I had a good chat with and a model Beufighter in nigh fighter scheme.

Gems from the Attic no1 - Airfix 1/32nd Strongpoint 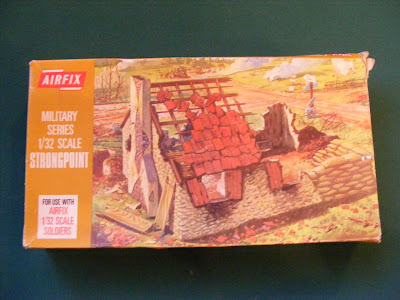 The expedition to the arctic....I mean Attic (though currently it feels very much like the former!!!) is going well. Enough 'surplus' kits have been garnered to sell on Saturday although I'm sure I should have been tougher. It is very difficult trying to decide what kit or box of figures to get rid of with the angel on one shoulder saying...'think of the family holiday that selling this will help to pay for' when the devil on the other shoulder says .....'think of all the different squadrons you can represent with those 20 Harrier kits'!!

Shoreham aero mart is what it says an aviation market but I do sell a few 1/35 tanks as well and this year the challenge to my co conspirator on the stall Chris Burton is to sell a box of ESCI Zulu's to some unsuspecting customer and he shall receive a pint, if he fails he buys me a pint at the end of the show! 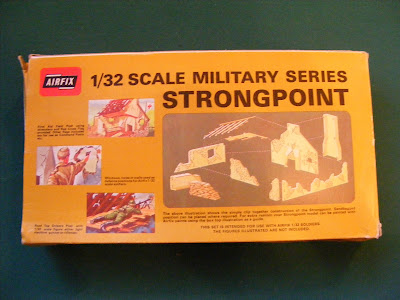 However the reason for this post is to remind everyone of this classic 1/32 scale kit, the original boxing of which I found in the aforementioned roof space. I also possess a made and battered model much fought over in the 1970's when my dad and I used 'Britain's' plastic farm sacks, milk churns, Airfix plastic FN Rifle Bullets, match sticks in firing Britains and crescent artillery models and corks to knock over the soldiers. This primitive 'Wellsian' wargaming was great fun and my son was introduced to this 'art of war' at an early age too. 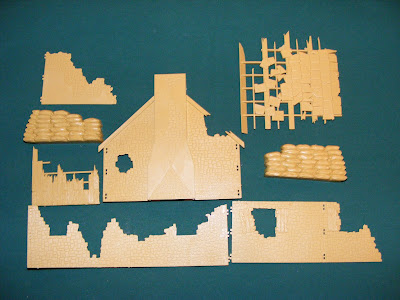 The Ninth Edition Airfix Catalogue which incidentally cost 15p describes it on page 55 as; no.1808 Strongpoint. the first of a new series. This snap together model of a partially demolished building is the perfect companion for the Airfix 1/32 soldiers. it can be used in many roles in addition to the strongpoint purposes, such as company headquarters or first - aid post.

Today I also scored 100 points in the 'geek' stakes after correctly identifying a started cockpit on Pauls plastic warriors blog as a Matchbox Lynx helicopter.......not sure if this is a good accolade BUT Paul's blog if you don't know it is well worth following.

The New projects I mentioned are looking very healthy too having found vastly more than expected Napoleonic, ACW and WW2 Desert Campaign figures and kits in the loft/attic more on that soon. Enough blogging for tonight it's Time to crack open a bottle of 'Badger' ale and to continue 'pricing' the stock. 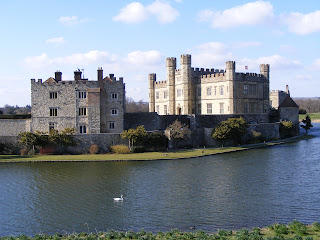 Easter Monday was spent with the family on an expedition to Leeds Castle Kent, on a bright but very cold day. Walking around the grounds it seemed we were mixed up in some kind of  'child buggy' grand prix with hundreds of tots being pushed around the network of paths surrounding this 'Loveliest of castles'. 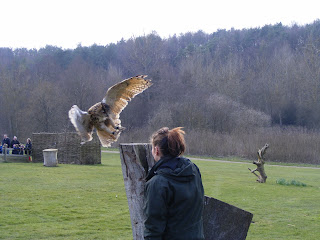 The best part of the visit was the Falconry display which consisted of a lazy Eagle Owl shown above in one of it's more active moments, 2 Harris Hawks and a superb Peregrine/Saker Falcon cross. 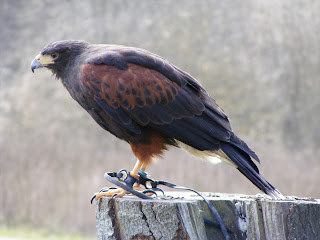 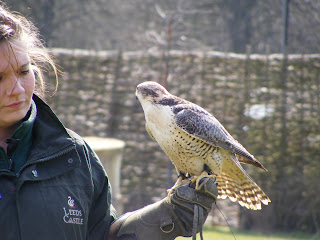 The peregrine/Saker Falcon was released and it promptly flew away gaining an altitude of 1,500 feet and was not seen again!! Well not by us as it was bitterly cold and a hot drink beckoned. 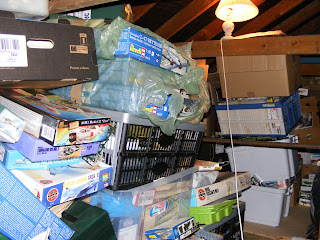 Today has been spent mostly in the dark of the Loft in my own 3 bedroom castle.....there have been a few collapses and falls of boxes during the past 12 months and I have decided that a major tidying session was needed to;  find stock for Saturdays Shoreham Aeromart, to find kits and figures for my new focused approach to modelling and wargaming  and to make room for the build up of 'stuff' collected in the past year and to free up the study and modelling room. 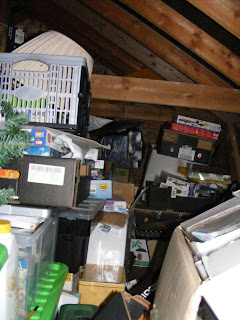 It has been a journey into the unknown and a bit like my perfect Christmas as there were kits and figures I had totally forgotten about lurking in the far recesses of the roof space. I have managed only to circumnavigate one half so far but found a lot of what I was looking for.... a few pics will be posted of the gems soon but they included a poster of Emerson Fittipaldi's McLaren from 1974 which used to be on my wall at home in the 70's, an original boxed Airfix 1/32nd Strongpoint and the remains of my first Airfix Waterloo Farmhouse!