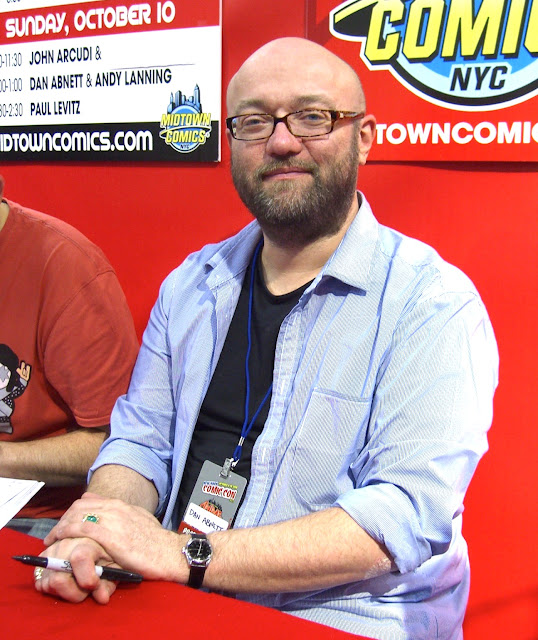 Today at the Academy where I am employed as the careers and guidance Tutor we had a visit organised by the English department from Dan Abnett who is probably most famous in certain wargaming circles for the huge number of Science Fiction novels he's written for the Warhammer 40,000 universe ...Gaunts Ghosts etc. Now I must confess I am not the greatest fan of the Warhammer franchise as the wargaming side is in my opinion a complete rip off with the ridiculously high prices for miniatures,  but I may just pick up one of Dan's novels as his talk on being a writer was absolutely superb and enthraling, and our students were very well behaved as he captivated them with his stories relating to his writing exploits,  not just for Warhammer, but also the comic 2000AD (2000th copy published yesterday) Marvel, Torchwood and the Dr Who radio series. 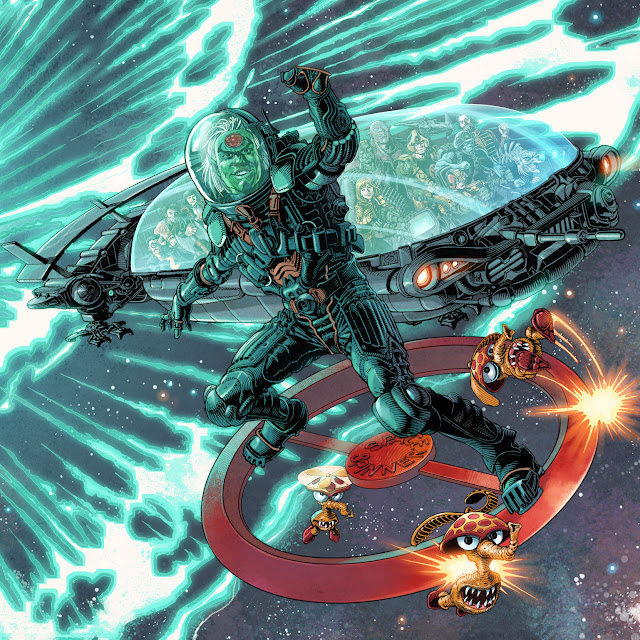 Dans military novels for Warhammer have been based on researching the experiences of soldiers from History. The experience of the crews of his invented giant war machines are based on WW2 submarine crews, and veterans who read his novels and comic strips believe he has served in the forces  as his depiction of camaraderie and military life is so convincing. His belief being that the human experience and condition doesn't change even if the weaponry and universe does.

He has been lucky enough to visit the private weapons collection of the British  Army on  a couple of occasions and has had the chance to feel the weight of weaponry and understand how different weapon systems are used (he has handled Napoleons dueling pistols while there!). Dan is also able to contact serving soldiers and airmen around the world who have entered into correspondence with him enabling him to enquire about aspects of service life.This attention to detail provides greater 'realism' in his science fiction writing. 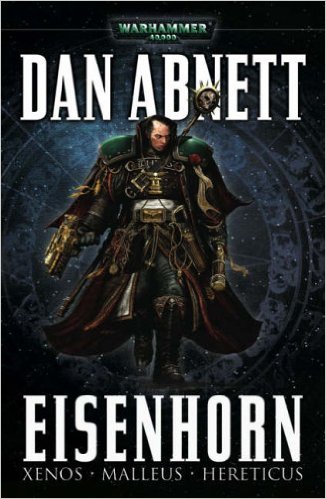 Apparently a Canadian Leopard Tank crew in Afghanistan were pinned down for a day in a hull down position and to offset the boredom of not moving in a closed down tank for 24 hours the commander read his copy of a Dan Abnett Warhammer novel breaking the paperback into 4 sections and passing it on to the other crew members as he read it. They gave Dan the tanks flag as a thank you! 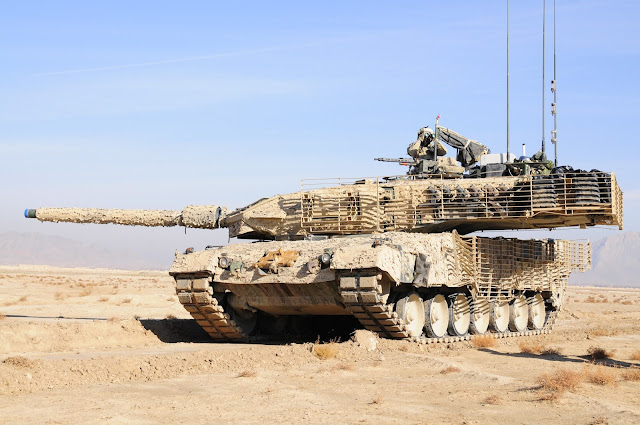 It was very interesting hearing how a comic strip is produced and how his Warhammer 40,000 novels have developed a more fleshed out fictional universe. The characters, vocalbury  and geography he's created have now influenced the rules and the game. After making Dan a cup of tea at break time I asked if he wargamed at all and he doesn't apart from visiting the Maidstone Warhammer shop to play the occasional game to help with his writing.
Posted by Fraxinus at 23:53 1 comment: 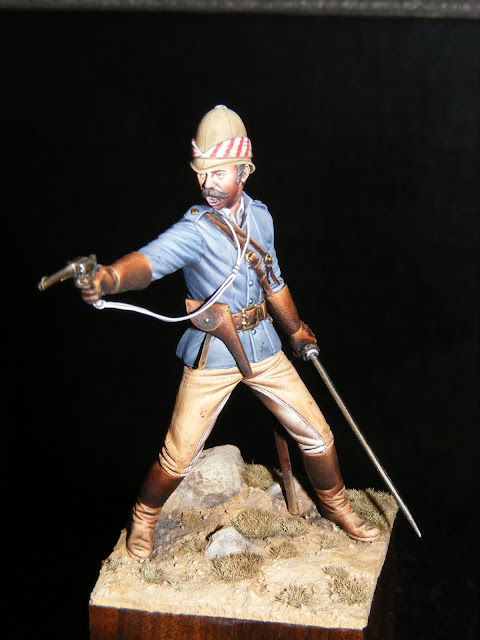 The show usually takes place mid September and always cheers me up as the summer draws to a close. It is in its 31st year at the Lees Cliff Hall in Folkestone and although its not a wargames event it is usually inspirational in terms of the modelling and artistic side of our hobby. The competition attracts international entrants and cannot be classed as a local model show although the usual support from Kent and Surrey modelling clubs is in evidence and gives the event a friendly feel. 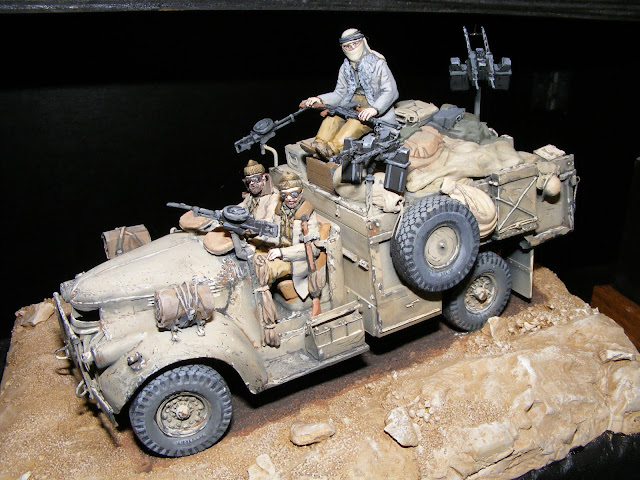 Was this years event as good as previous years? well apparently entrants to the competition hall were apparently down by 400! and I must admit I did notice a lack of Dioramas this year and there was not one that made me go WOW (or words to that effect!) If it wasn't for the Fantasy class entrants the hall would have looked threadbare. The military vehicles section wasn't overly inspiring either but still there was some fantastic artwork on display in the other classes which can either inspire you or make you think 'I'm unworthy'!! 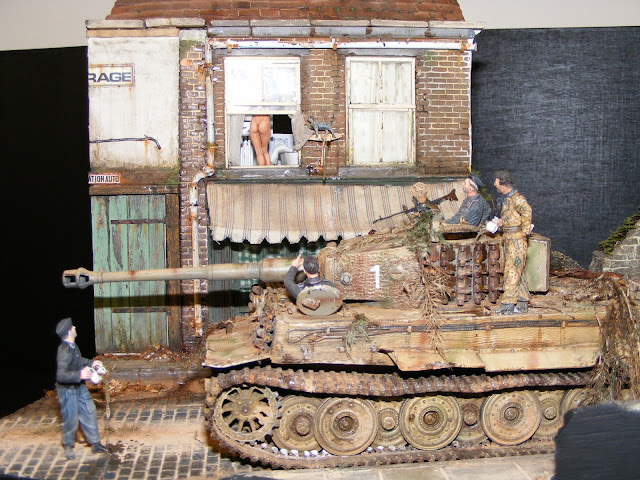 The above diorama made most smile entitled 'Window Shopping, a Room With a View' it showed some barefaced cheek! Another frivolous diorama (see below) was probably the best in this category the construction of the building itself must have taken hundreds and hundreds of hours even before the rest of the scene was populated and dressed  with incredible detail. 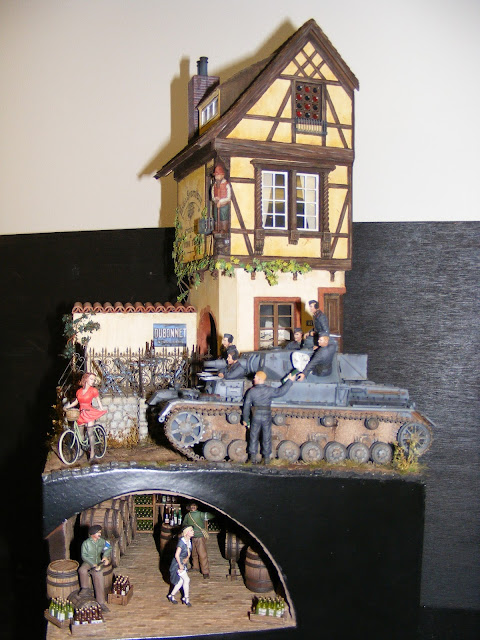 The single figure section was reasonably well supported with some excellent painting on display and a nice mix of painting styles which caught the eye, although I must admit there was not one outstanding figure , which sometimes helps ones own confidence as you think 'well perhaps with a little bit of care and practise I could be as good as that'. 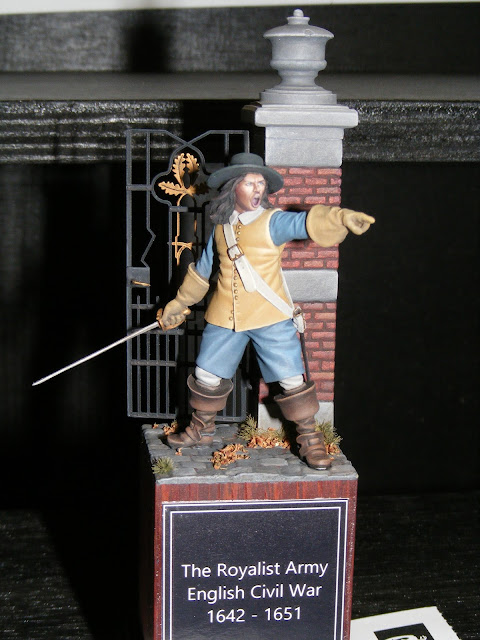 The Fantasy section again demonstrated some fantastic technical painting skills and it's these guys and girls who seem to have perfected embellishing figures in a context setting with some fantastic groundwork, foliage and 'extras' that make some of these figures really standout even if you are not a Fantasy fan. 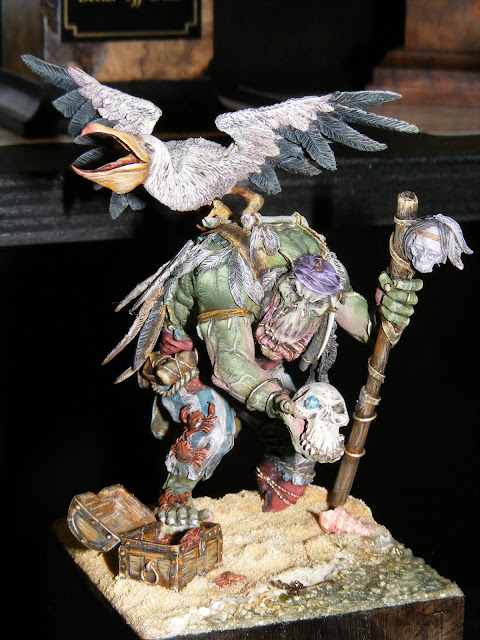 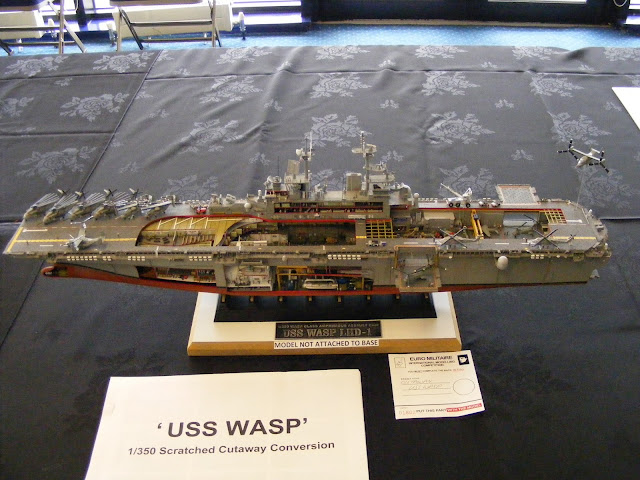 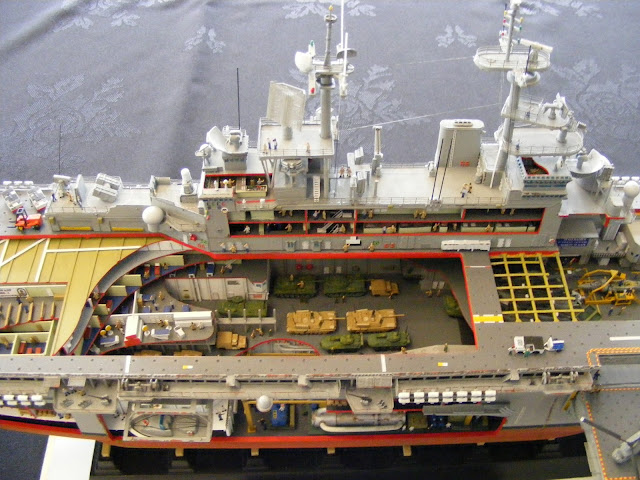 Instead of overloading this post with many more pictures I will add pictures from the day to my other posts and include the pick of the bunch from last year as well, which included the Battle of Waterloo which was an exhibition piece on the main stage. The trade area was where I noticed visitor numbers were down on previous years especially as the Saturday of this two day event is usually the busiest. Most stallholders were reasonably happy with sales but some of the prices of the hyper detailed resin figures made my eyes water! It was nice to see Tommy's War there with their first world war resin figure range and Mitches Military Models had a superb WW2 British Para in 75mm and 120mm scale running with a mortar round container. 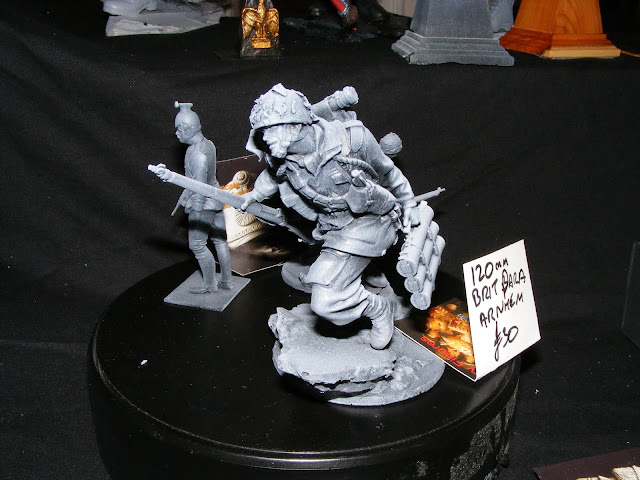 I did buy a few things mostly wargame orientated which included Attack Kits 1/72 Marmon Herrington MK II Armoured Car and a few boxes of Hat figures for my Ancient and Napoleonic armies. I will also have a crack at the Master Box French Cuirassier  vignette as I saw a couple nicely painted at the show and injection moulded plastic is far cheaper than limited run resin. 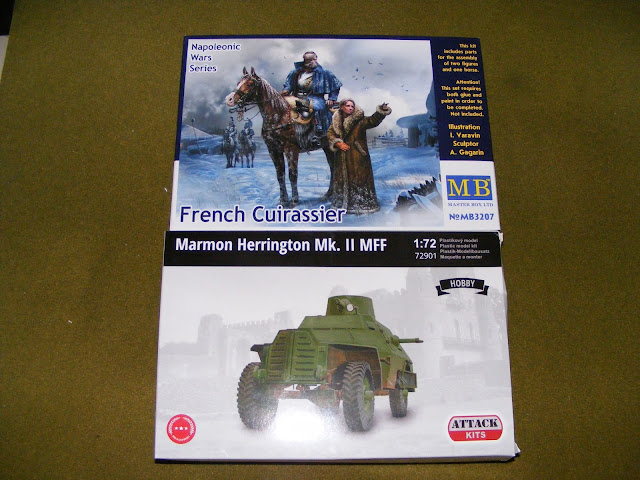 Well thats a long enough entry on the blog and to sumarise a good event but perhaps a little on the wane compared to the heady years when re enactors were present outside, demonstrators showed off their painting or sculpting skills and bargains were to be had from the retailers. 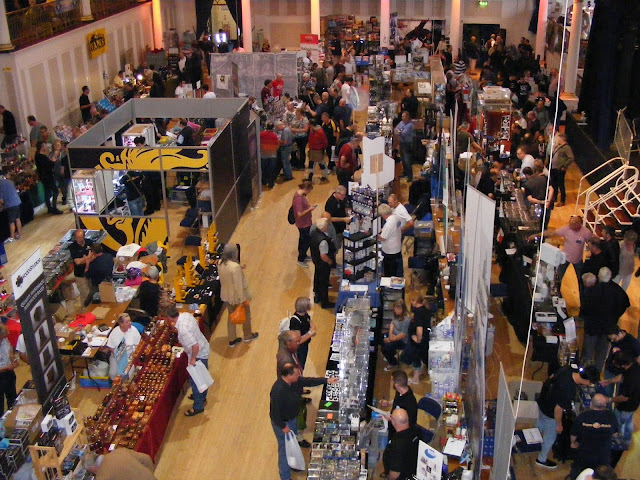 A Return to Military Boardgames 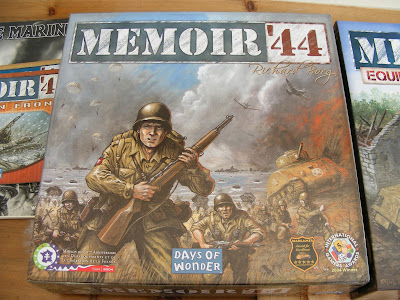 The Friday before returning to work after the long summer education break I eventually met up with my Wargaming opponent Mark who is also lucky/unlucky (delete as appropriate) enough to be in the secondary education sector. To cheer ourselves up we had a game of Memoir '44 a game by Richard Berg. Now I haven't played 'Wargame Boardgames' since the 1980's when it was Advanced Squad Leader, Cry Havoc (would love a copy of that fun game again), Storm Over Arnhem, Third Reich  and the massive 'Europa' series of games which if I remember correctly had different WW2 campaigns. Case White the invasion of Russia had maps big enough to cover a ping pong table and 3,000 card pieces denoting Russian and German units...mind blowing stuff in my late teenage years. 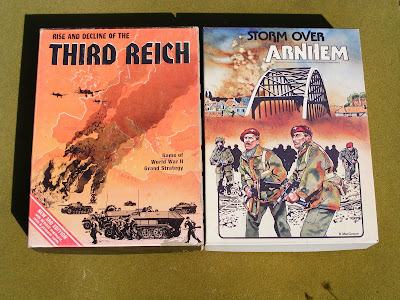 Now Memoir '44 is a stylised game with very easy to learn rules and scenarios based on simplified major engagements in WW2  from D Day onwards. Mark had been playing his son over the summer and recommended this game for light entertainment although it is surprisingly strategic and you need to time the playing of key  command cards to achieve your objectives and wiping out enemy units to earn yourself  'medals', Huzzah! 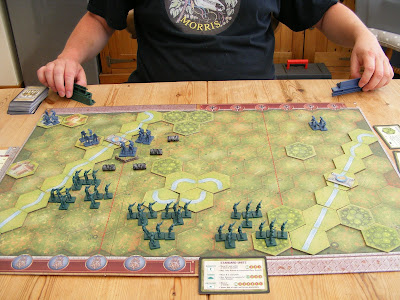 We played the first scenario, Pegasus Bridge which just involved infantry units enabling me to learn the basic rules quickly. As you can see in the pictures (although others will be more acquainted with this game I'm sure)it is a very basic representation of the terrain encountered with the two objectives the famous Pegasus Canal Bridge on the left and the Orne River Bridge on the right. 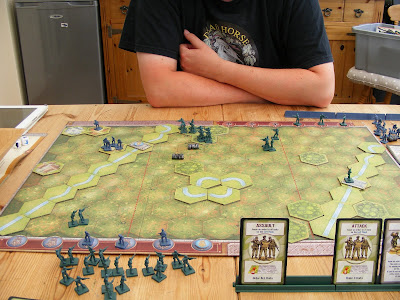 Initially I tried to attack Pegasus Bridge head on dashing like the glider troops did straight up to the bridge....this resulted in many casualties and my Paras took a real hiding, however the Orne Bridge was simpler and taken relatively quickly. Mark is a superb defensive wargamer and usually enjoys many wins against my more headstrong attacking mentality.....however eventually I outflanked the German  defenders and with a few fortuitous attack cards turning up from the deck giving me heavy weapons support bonuses and a change in my dice rolling luck led to final victory for the plucky Paras after being behind for most of the game. 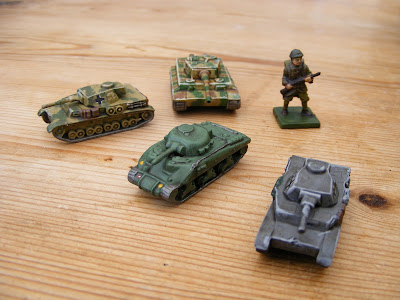 The playing pieces again are stylised representations of Weapons/Tanks & Infantry but with Marks superb painting skills they end up looking brilliant and much more inspiring. 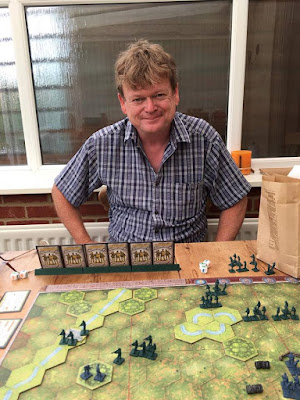 The smug look of Victory for Fraxinus or was it the happy consumption of Jam doughnuts during the game! After an enjoyable mornings play we had to visit one of Dovers micro pubs the 'Rack of Ale' for an enlightening tour of the tap room & quafing of Firkin summer ale.
Posted by Fraxinus at 10:59 3 comments:
Newer Posts Older Posts Home
Subscribe to: Posts (Atom)