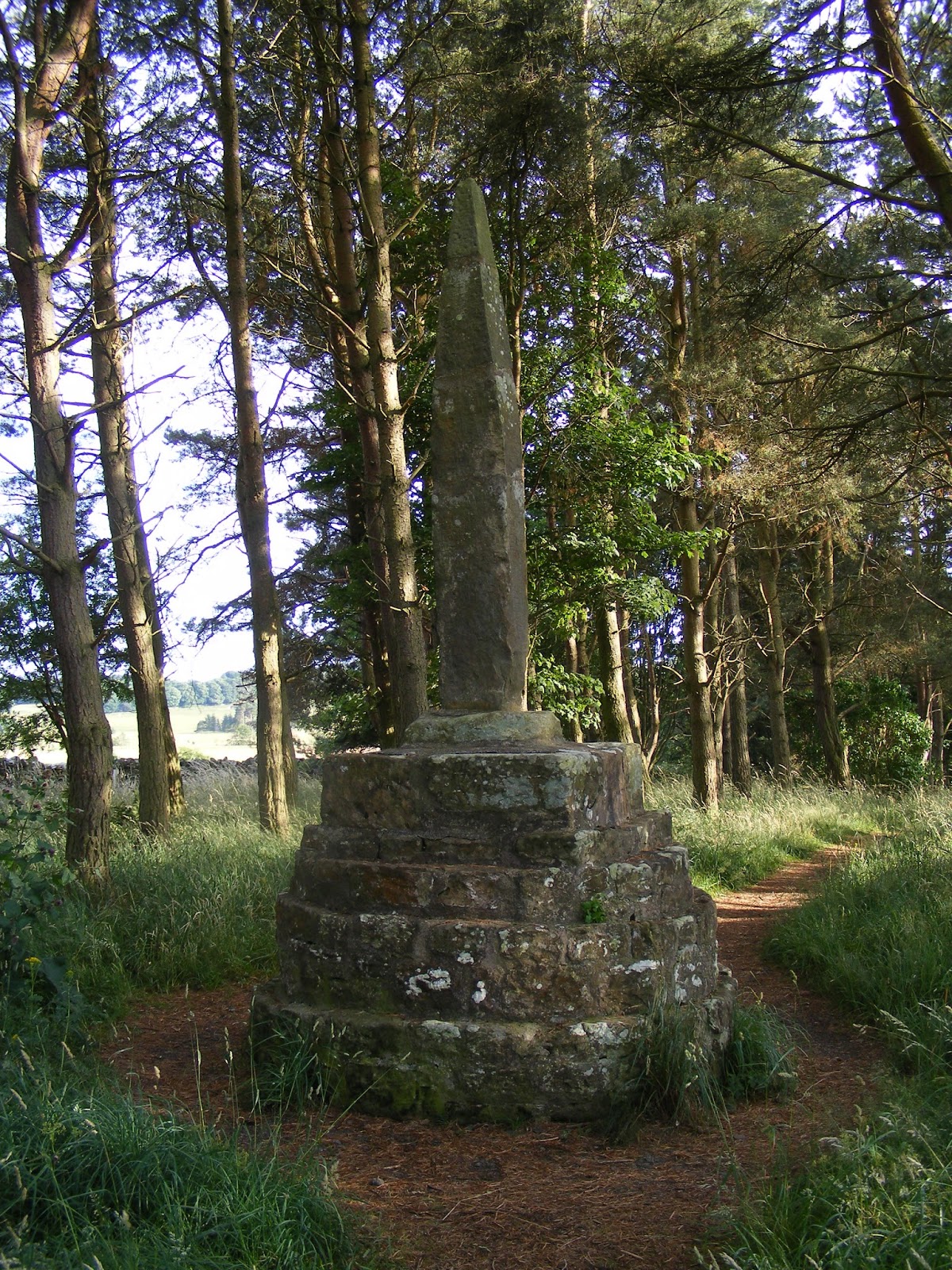 Two weeks ago it was all systems go for a Northumberland Holiday staying in Kielder Forest. Hazel and I had a large itinerary of places to visit and walks to do;  Hadrians Wall, Bamburgh castle, Cragside House, Alnwick Castle, Warkworth Castle, The Cheviot Hills, Flodden Battlefield, Farne Islands etc etc etc. All initially went well an excellent drive of 430 miles from Kent followed by a 12 mile walk next day along the Kielder Lake footpath, superb scenery and some jolly nice ale sampling at a local hostelry! 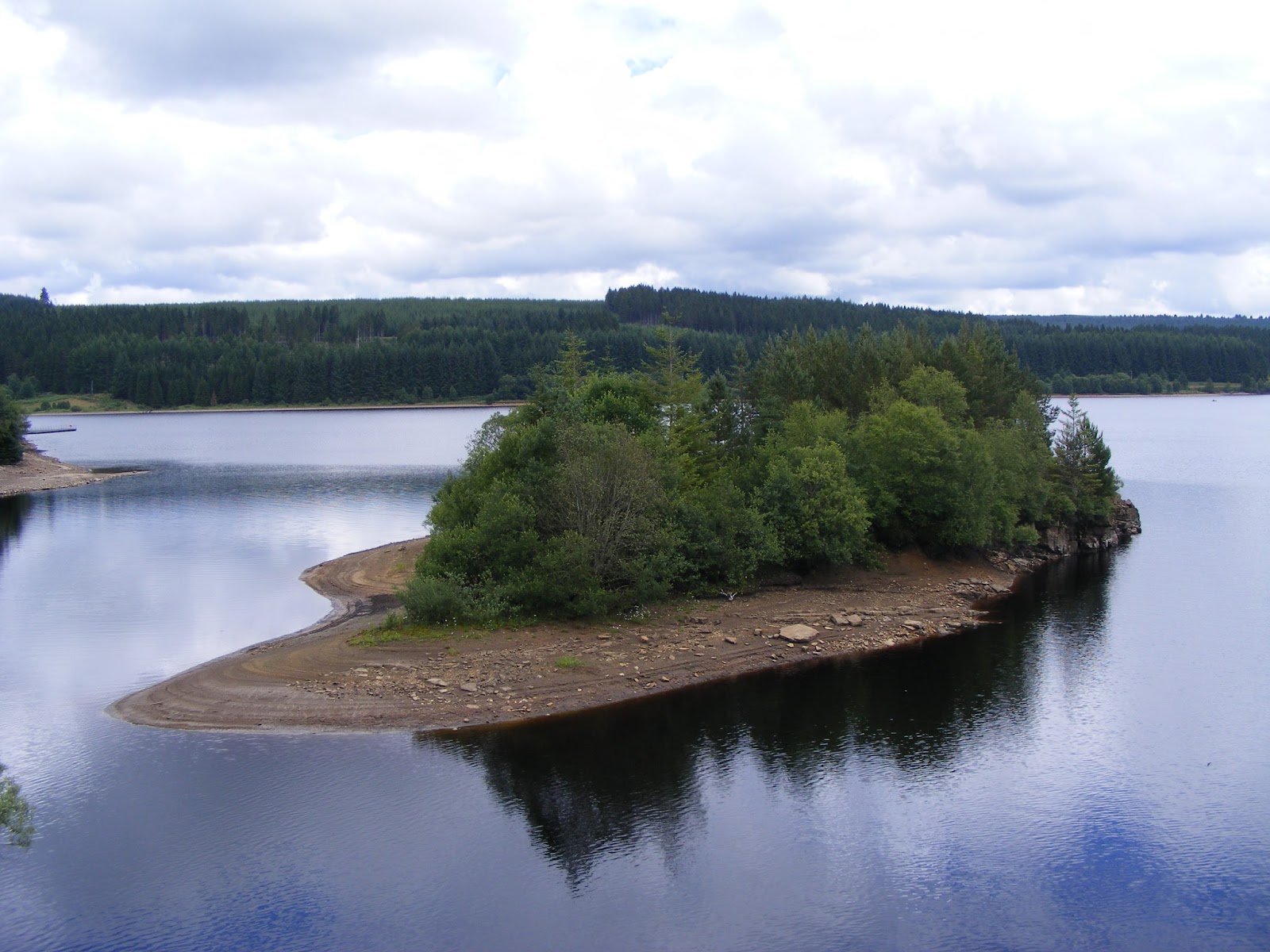 Kielder water is huge and surrounded by  massive commercial forestry operations which cut off the local electricity supply to Kielder Village when felling is in progress nearby. The whole area is set up for outdoor tourism with campsites and water sports centers 'all over the shop'. 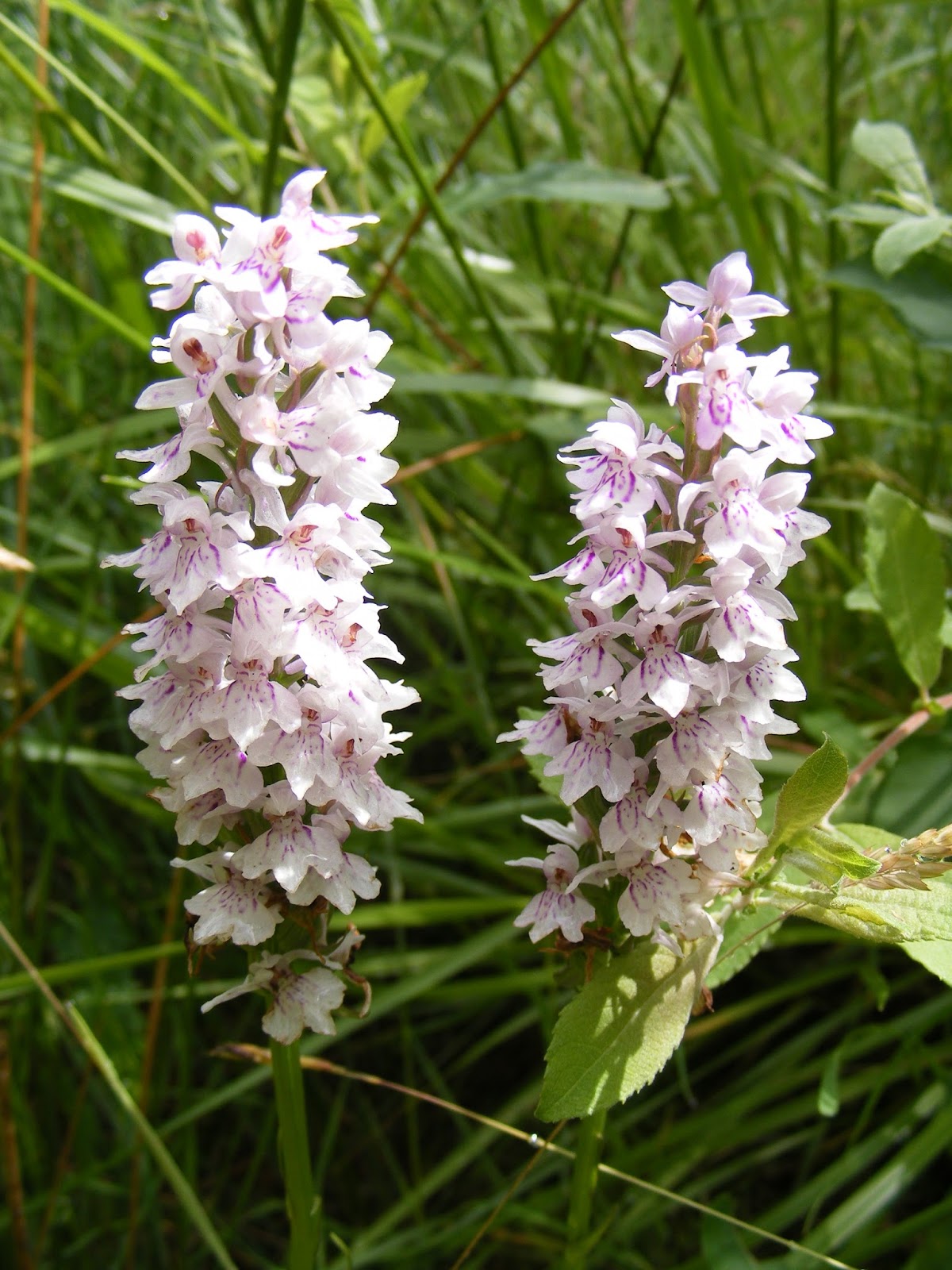 The wildlife was superb and for a qualified Countryside Manager like me I was amazed at the amount of Orchids (lesser Spotted) growing like weeds along the footpath on our walk along the shore line. 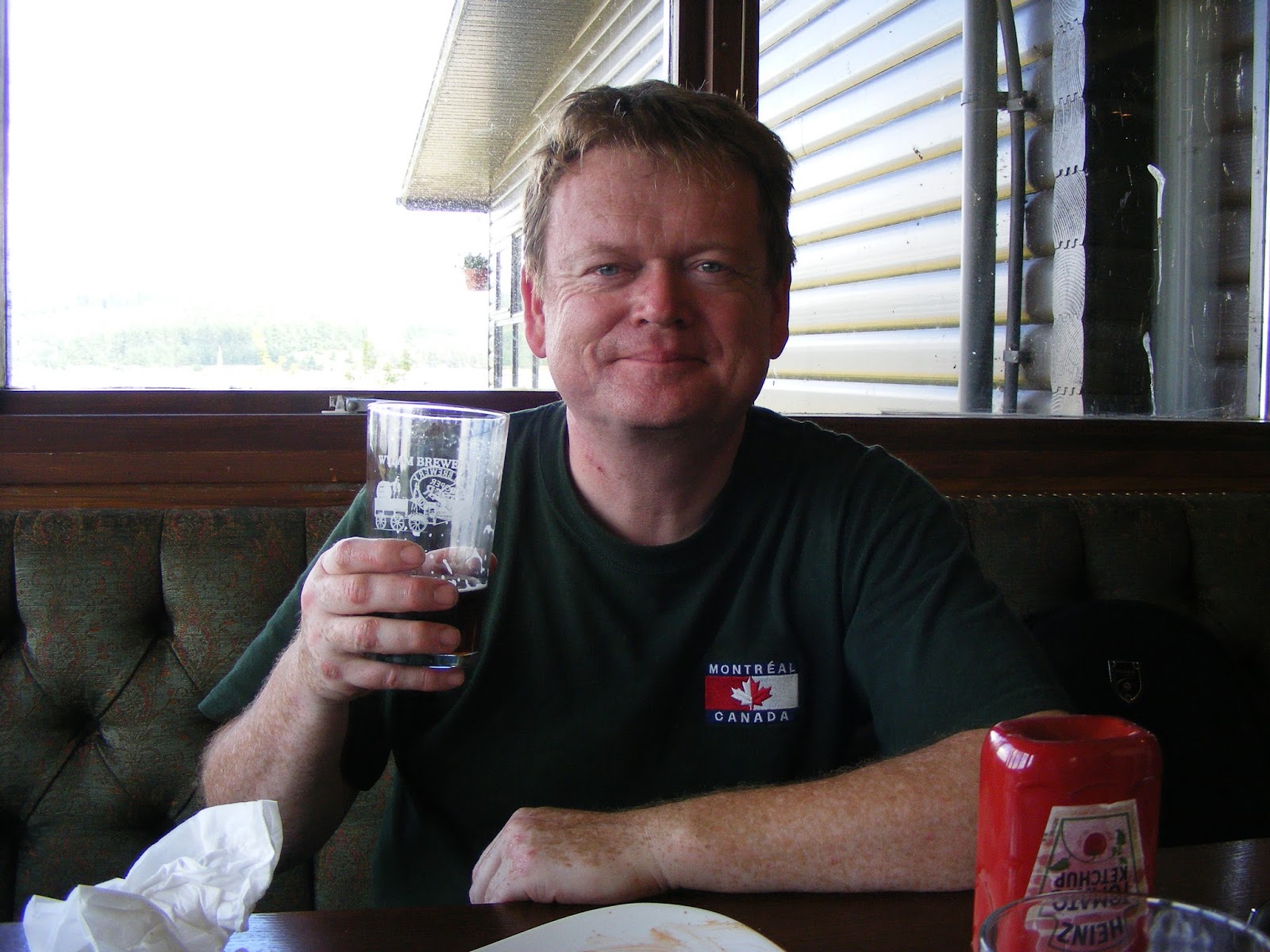 Anyway BEER! I was delighted to sample two local brews by the Wylam Brewery 'Dognobbler' a 3.9% light hoppy and very refreshing ale after a hot walk followed by a more mature ruby red ale 'Red Kite' at 4.5% a very wholesome ale along the lines of Shepherd Neames 'Late Red'. The one thing you do need to do when walking along Kielder water is to cover yourself entirely in 'Mossie Guard'....them midges assemble in 'fighter gruppen' and descend on any exposed white flesh available! 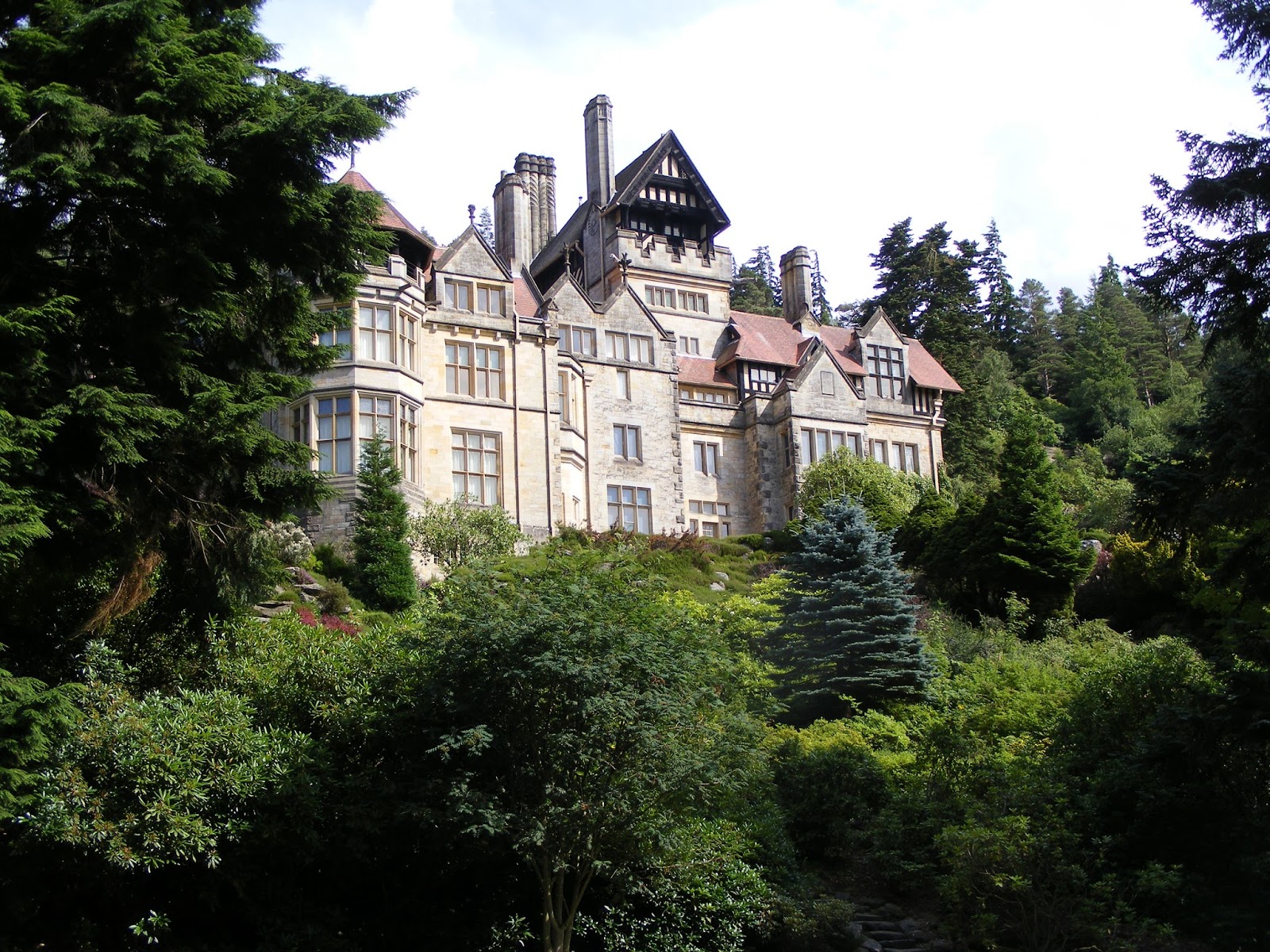 The second day of the holiday included Cragside House famous for being the first 'domestic' home with electric light and the country seat of the Victorian Industrialist and arms manufacturer Lord Armstrong. A fantastic 'pile' with an 8 tonne Italian marble fireplace on the third floor supported on the rock face which the house is built into, interestingly for an industrialists house it was furnished in very much a William Morris Arts and Crafts sort of way although it can be said the whole house was definitely the domain of 'chaps' with Billiard rooms and hunting pictures and collections everywhere. 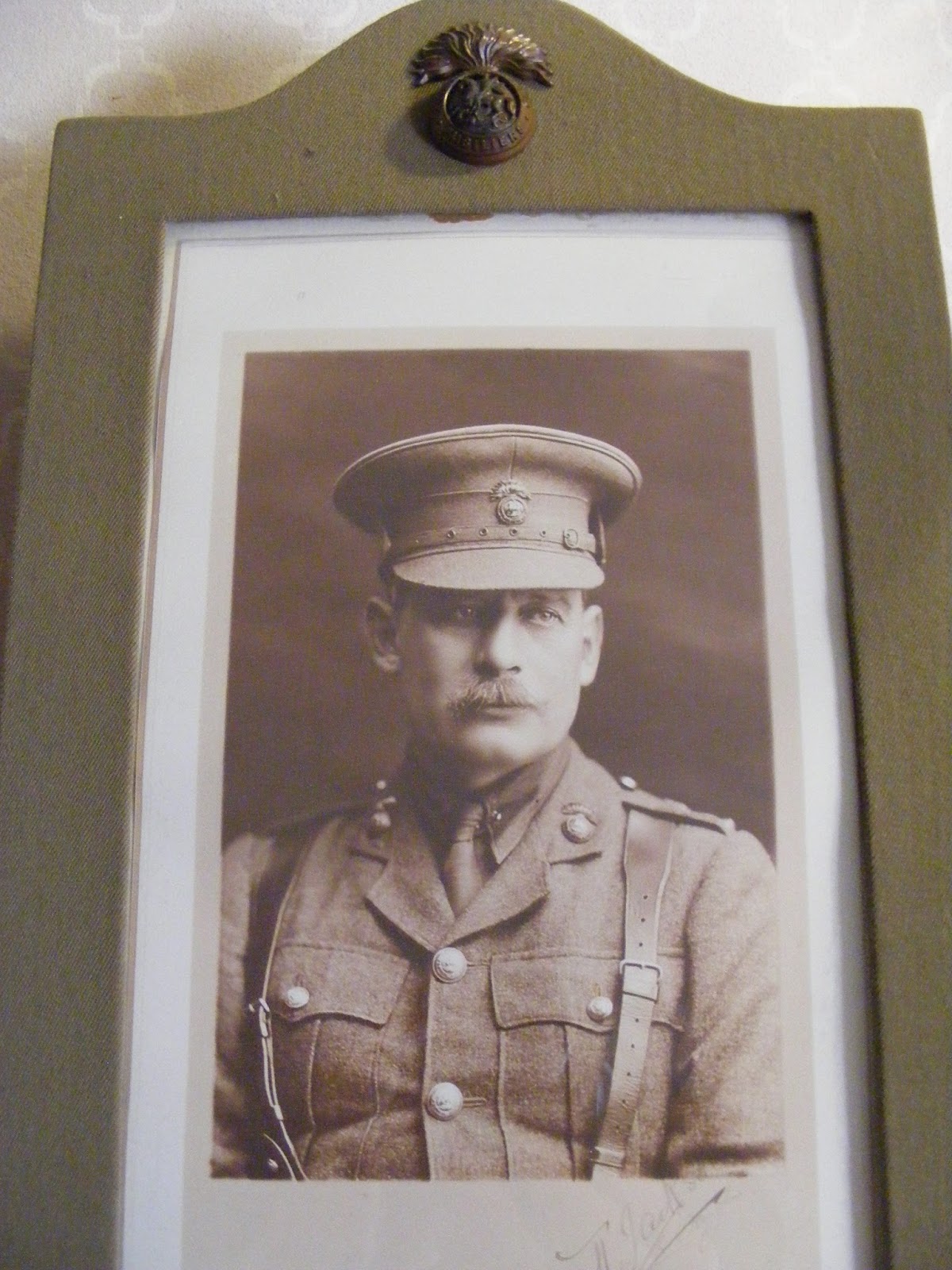 A picture of a Military Chap 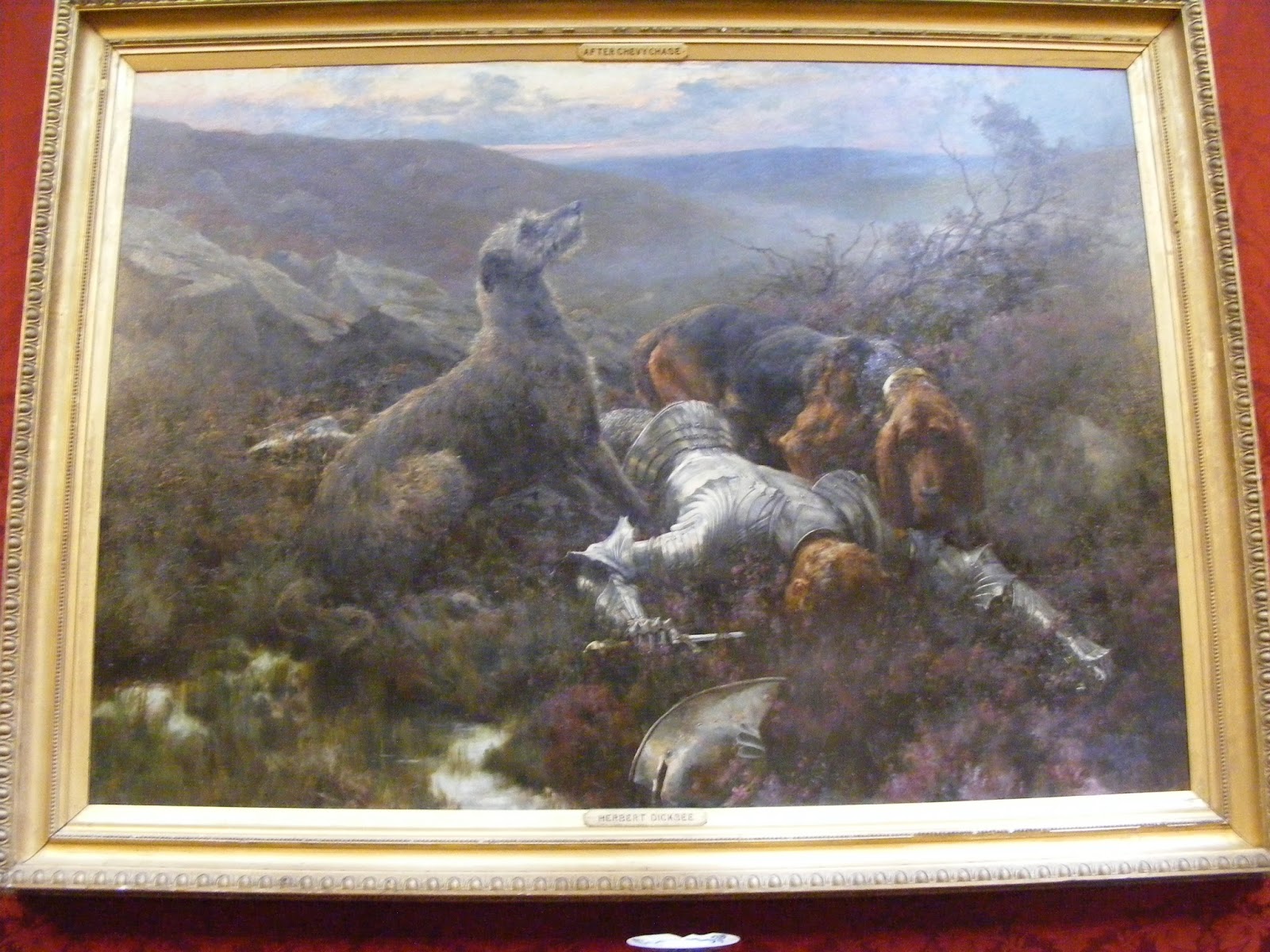 A Victorian Painting 'After Chevy Chase' The Battle of Otterburn 1388 usual Victorian sentimentality and wrong period armour by about 150 years! 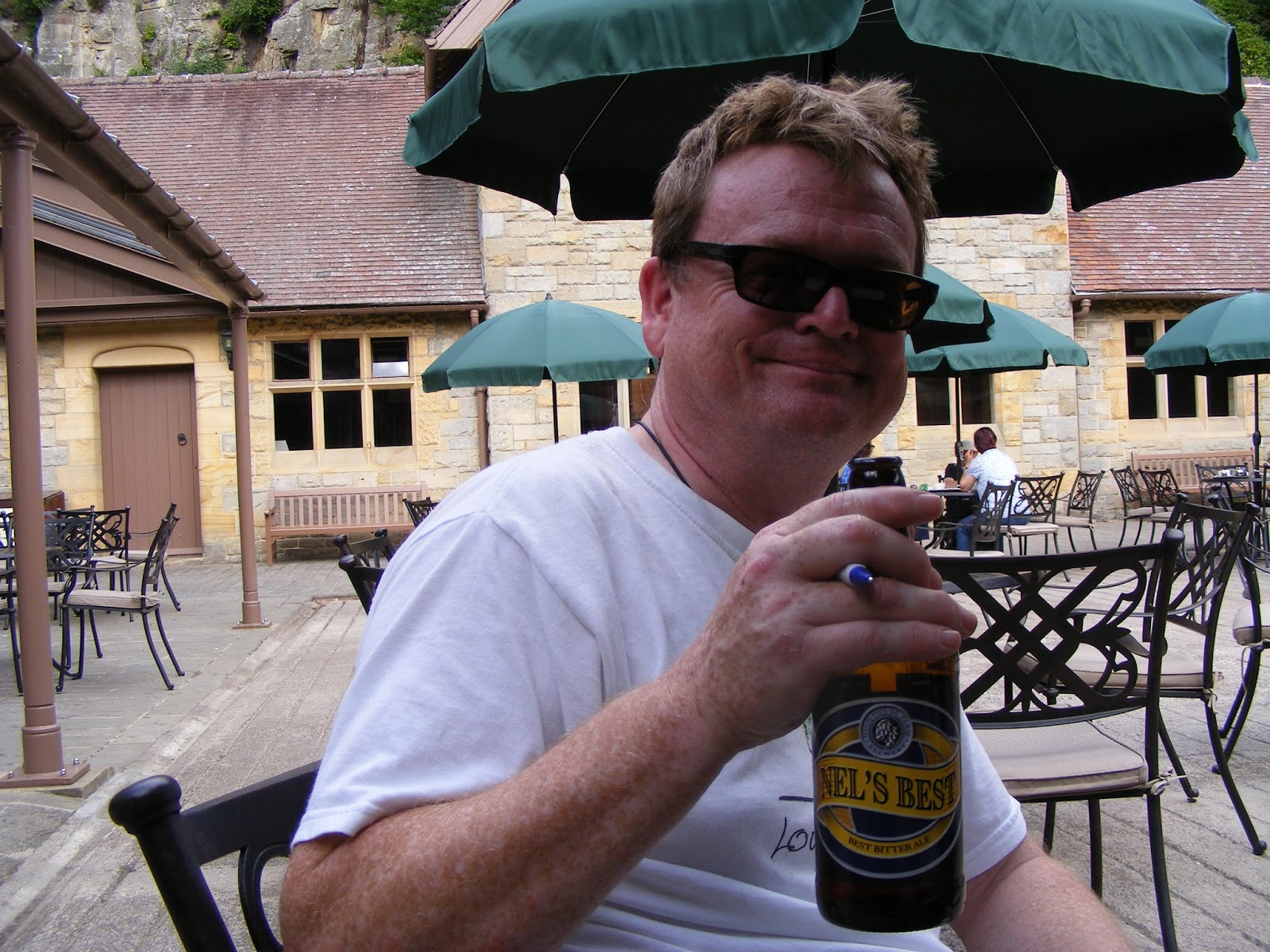 More BEER before 'doing the gardens' this time 'Nels Best' by the High House Farm Brewery a deep golden 4.2% ale another clean and refreshing modern ale named after the local farms Collie Dog! 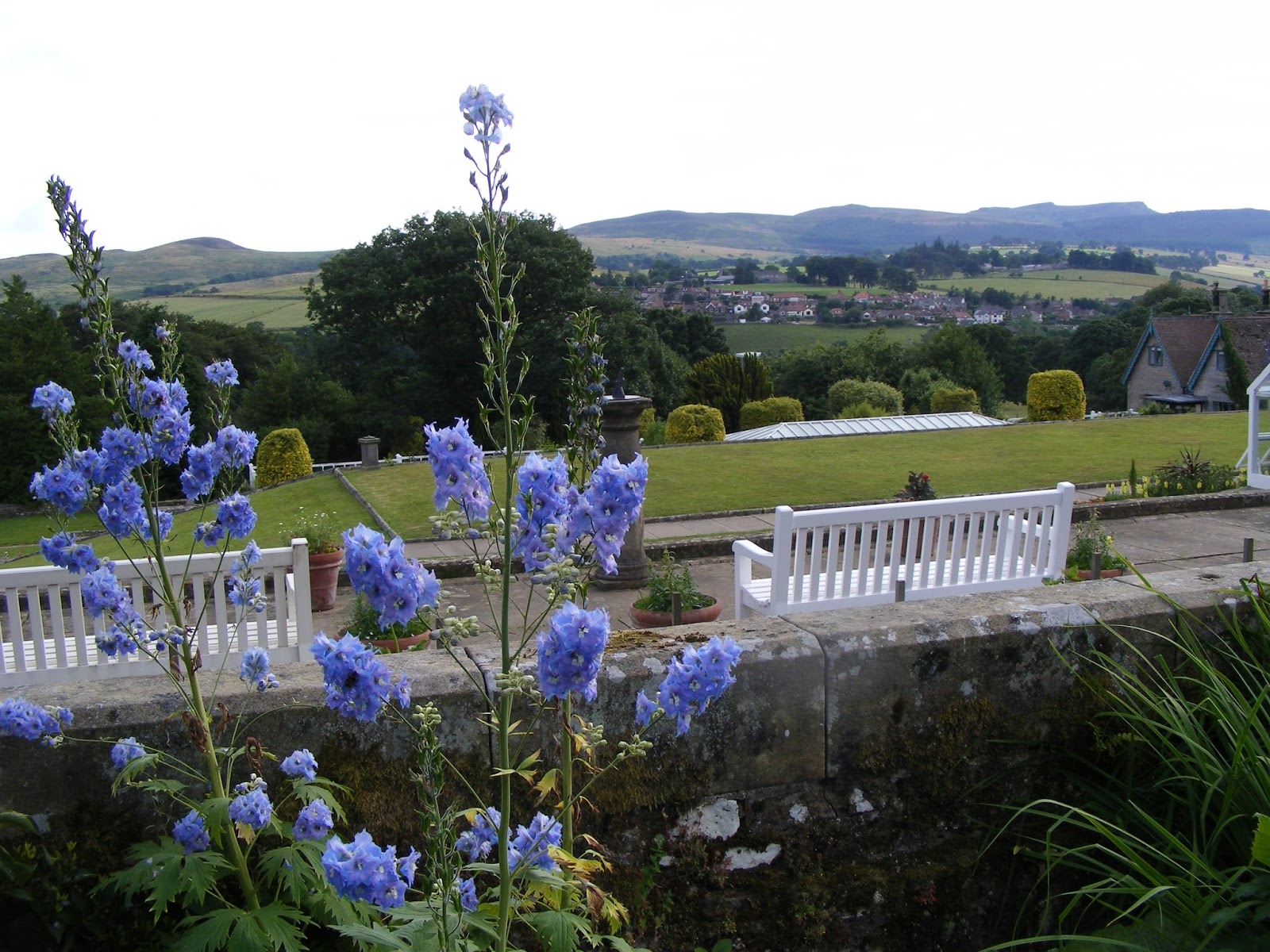 The formal gardens were a good walk from the house but what a view! 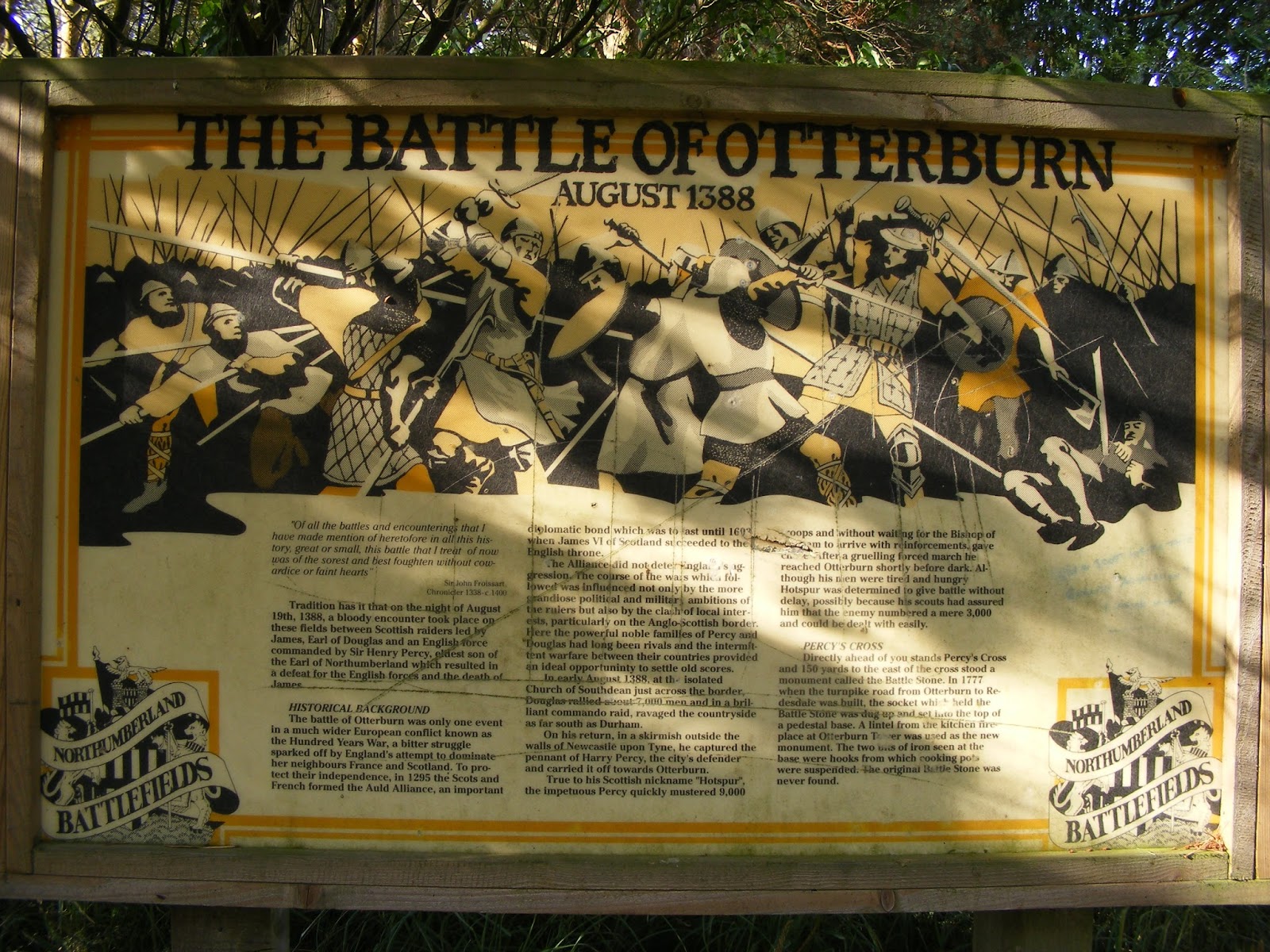 Returning from Cragside to Kielder we went via the Village of Otterburn famous for its 'Private Battle' in 1388 basically English V Scots but in all reality it could have been billed as Percy V Douglas which Douglas's men won although Douglas himself was killed and Henry Percy 'Hotspur' was captured. Both armies were about 7,000 strong and the conventional English tactics of using longbows failed as it was getting too dark to fire arrows. The Ballad of Chevy Chase described the bloody encounter these three verses seem appropriate;

They  took 'on' on either hand
By the light of the moon,
Many had no strength for to stand
In Cheviot the hills above 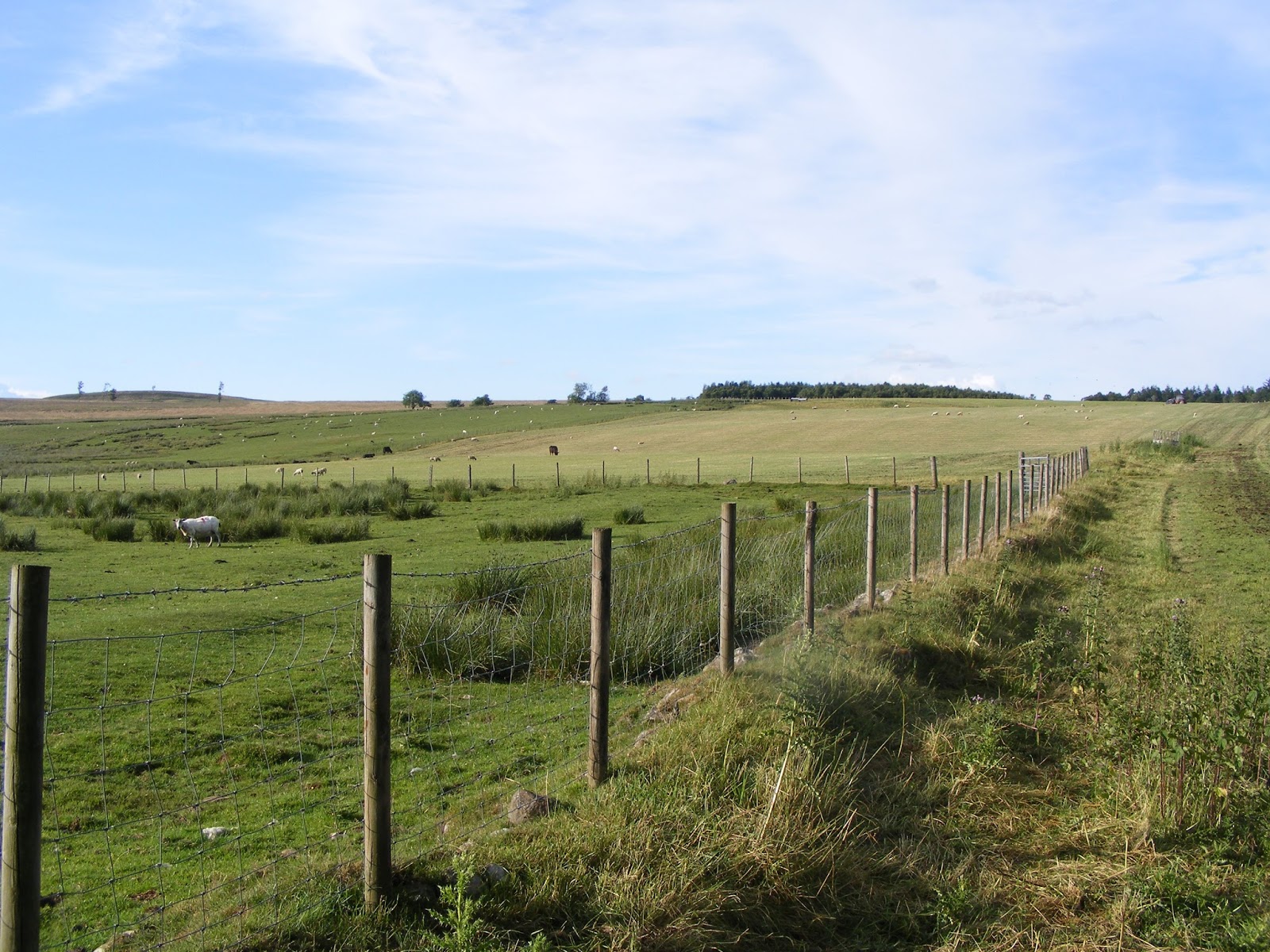 The memorial stone to the battle is in the photo at the top of this piece and is contained within a grove of Larch trees planted by the national Trust in 1977 there is the one interpretation board and a few sorry looking picnic tables. behind the larches the land where the battle took place is shown above. A nice range of wargames figures are produced for this battle by Claymore Castings in 28mm On Friday evening we heard my father had been rushed into hospital during the day so after a bad nights sleep we decided we would do Alnwick castle and then return south so we made the most of our last day in Northumberland by spending it entirely at the castle which I will follow up on in a future posting especially with regards to the Northumberland Fusiliers Museum. 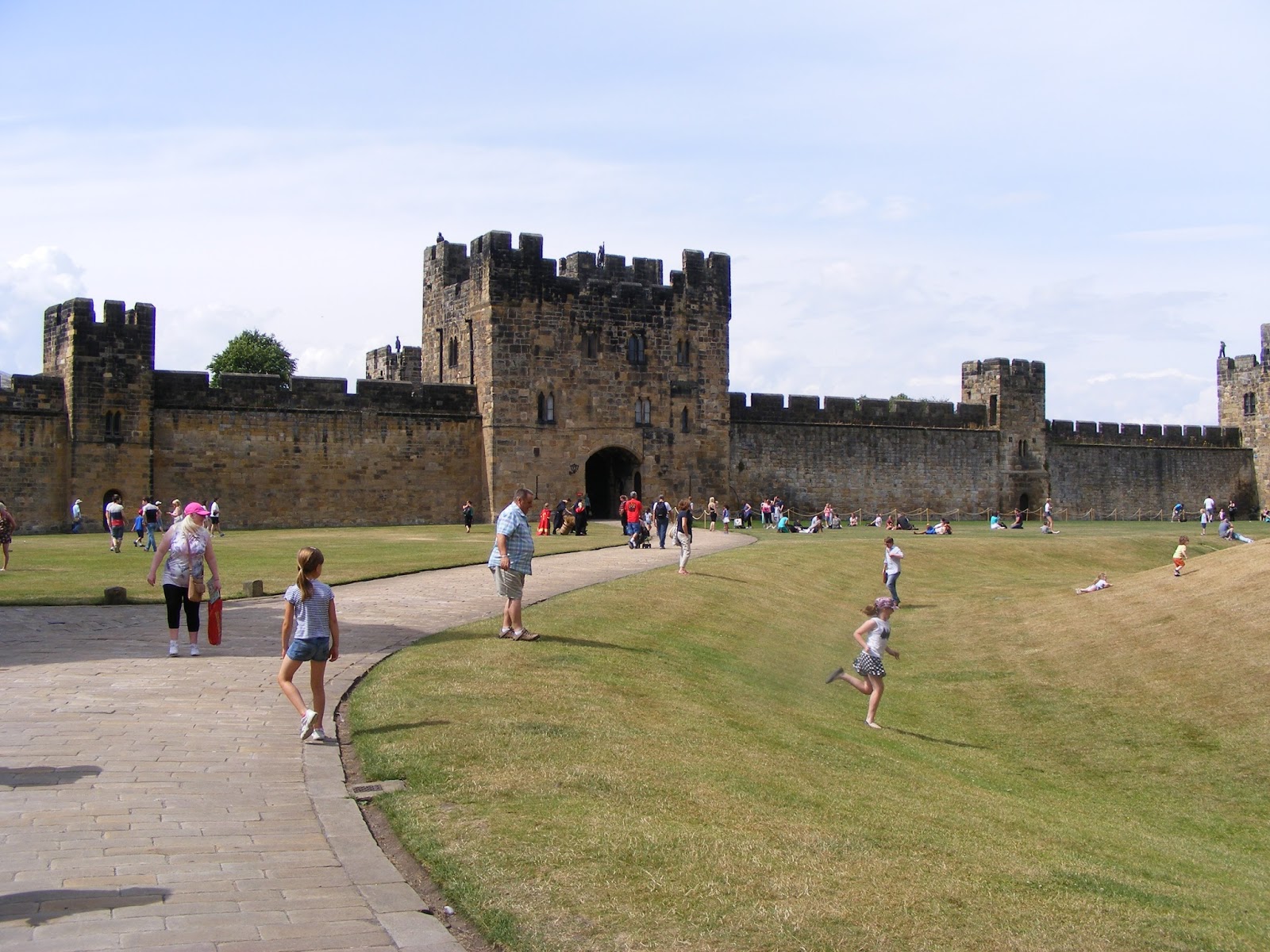 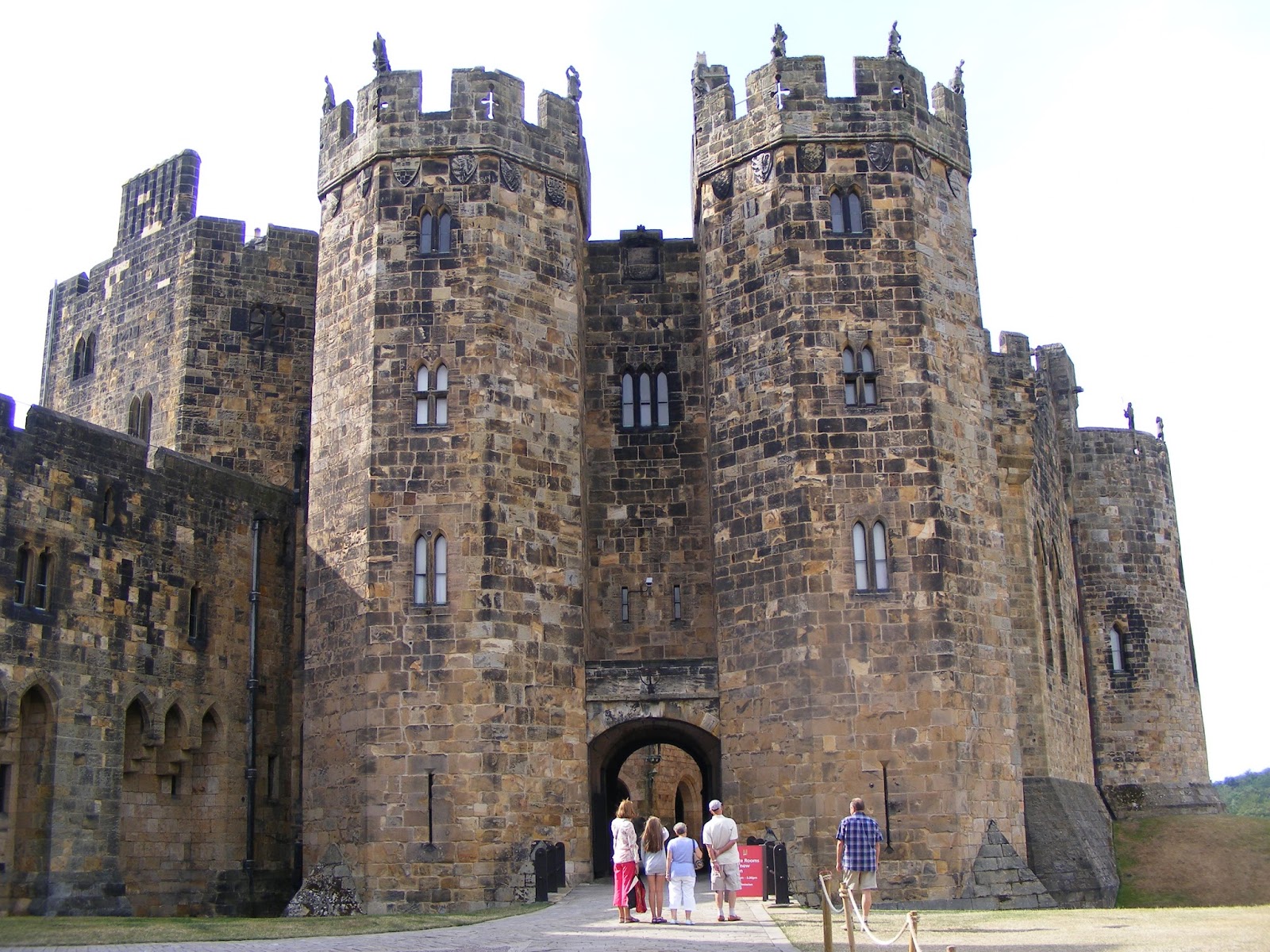 The state rooms were very ornate (no photos allowed sadly) and some impressive masterpieces were on display including some Canaletto's which I always love seeing, the 'light' he put into his paintings always astounds me. 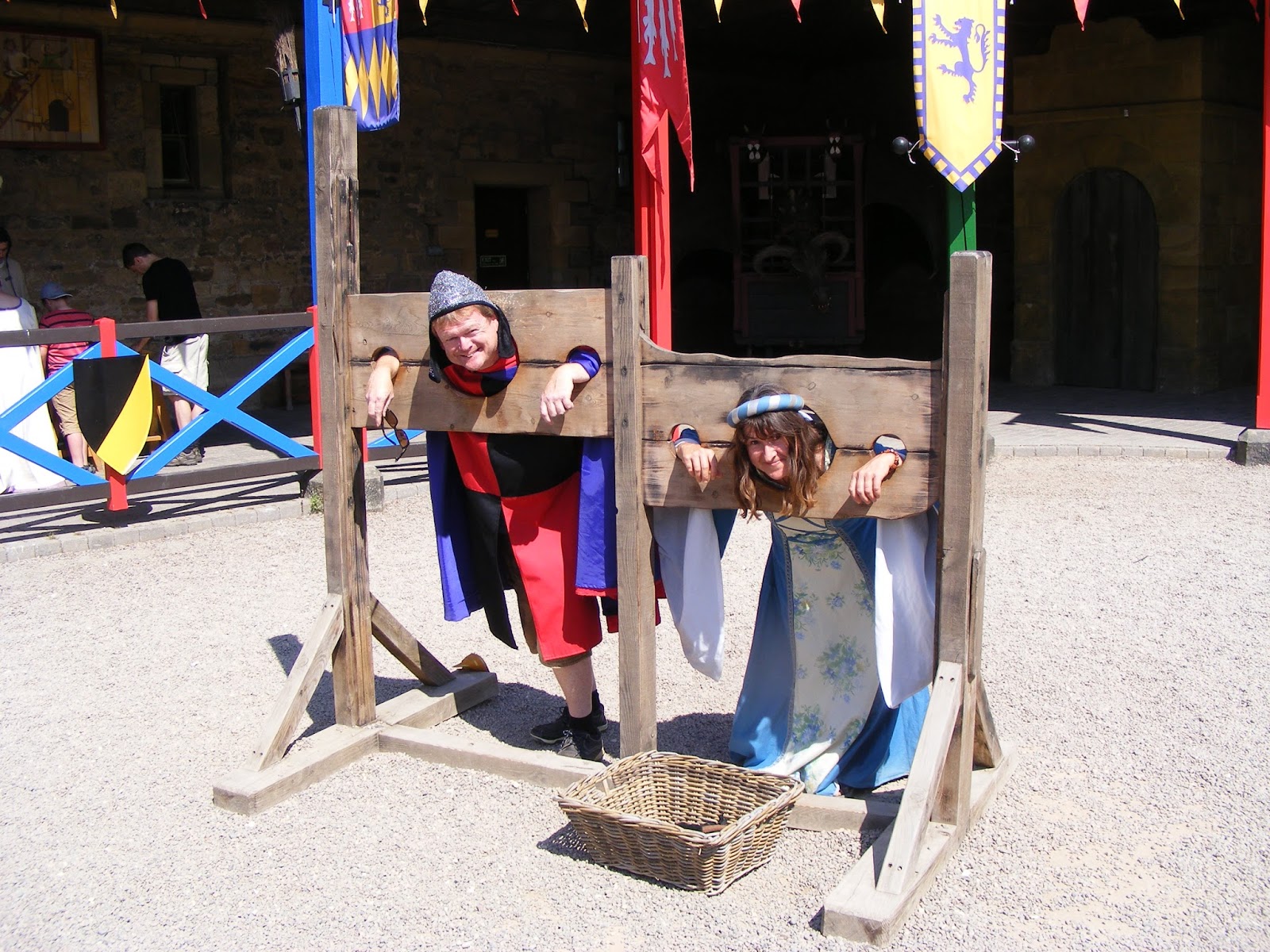 Never ones to miss an opportunity to look stupid we duly got togged up and got stuck in the stocks! 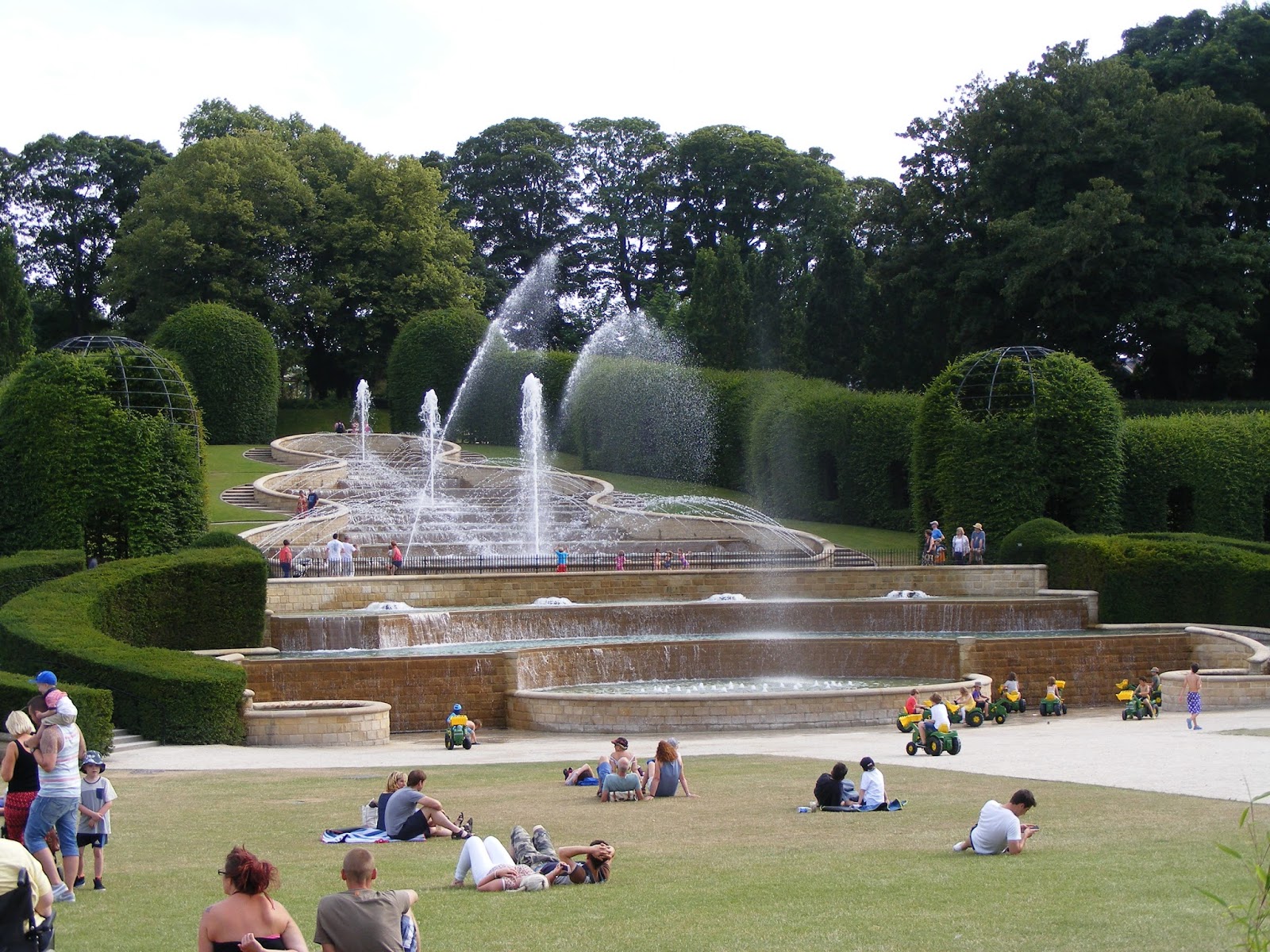 The castle gardens were equally impressive and the children were enjoying the joke fountains! Sadly the next day we left for Surrey and I have spent the last 10 days helping my parents, dad is now out of Hospital after contracting Pneumonia and blood clots on his lungs and is making slow but steady progress. I did take my 'modelling crate' thinking I would get time to complete some Panzer IV's etc but it was full on being a carer and sorting out medical appointments and support .... I also visited the Local Sainsbury's supermarket more times than I care to remember!