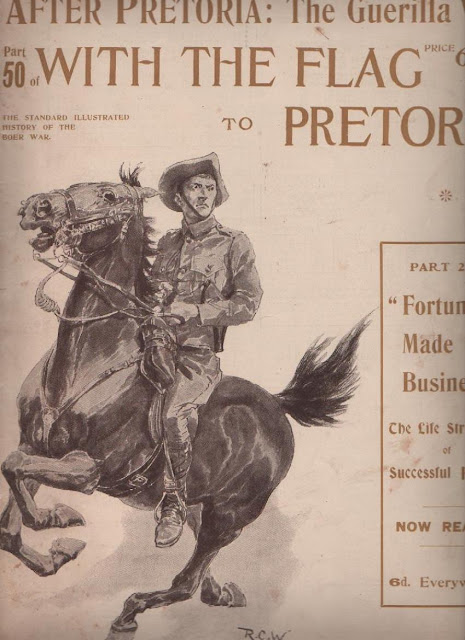 Ok so the picture doesn't correspond with the title of this post!! but as I havn't got any pictures of a wargames show at Ramsgate etc thought I would scan the cover of 1 of 6 issues of the 'With the Flag to Pretoria' I picked up today at the Antiques fair in Westgate Hall , Canterbury where the Trust I belong to is hoping to take over the centre and has a stand once a month. 'sadly'!! there are some interesting stalls including a very good and reasonable book stall, a militaria specialist and vintage diecast stand and I do succumb!!
I do love these period jingoistic magazines mostly for the artwork which is superb, This cover is by Caton Woodville  the famous military illustrator & painter.
Anyway stop woffling, the show is a small show run by Michael of Red Knight games (previously the Snipers Nest in Ramsgate) couple of weeks ago I went to the shop and it had been replaced by a sweet shop!!!so no Great War figs or Perry French Dragoons in there then, the new shop owner said that the wargames shop had moved to the New Marlow Innovation centre at the Marlow Academy on the outskirts of Ramsgate.
I ventured up there recently and the best thing is you get a cup of coffee now hurrah, michael's is a great chap always helpful with ordering figures in and supporting the local clubs, mostly concentrating on attending shows and trading from the enterprise centre for the local wargamers than paying silly high street rents.
Anyway tomorrow is the 3rd wargames show proceeds of which go to the Britsish legion, it's a small local show, but it is getting gradually bigger, This year there will be about half a dozen demo or participation games, a few trade stands, a raffle, refreshments and piles of free parking immediately outside the venue. All this for a mere £2 entrance which goes to the British Legion.

This year it’s being held at the Marlowe Academy, on Marlowe Way, Ramsgate CT12 6FA on Sunday 14th November from 10.00am-4.00pm. Should you need more info then get in touch with those nice folk at Red Knight, namely Michael or Sheree, on either 01843 598640, or their mobile 07745 284925, or drop them an email via redknightwargames@yahoo.co.uk or even wander along to their premises at the Marlowe Innovation Centre in the bright orange building opposite the Academy. This last bit of info is 'nicked' from 6 Mil Phils blog, the first Wargames/modelling blogger I have ever met (must attend more shows I suppose!!) a
Now there is a link between a Ramsgate school and the 110 year old magazine this advert ! 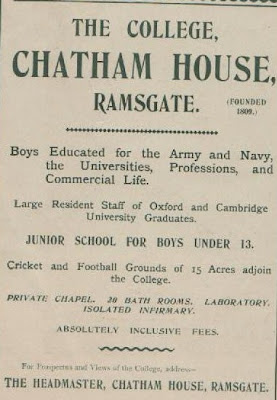 Jolly glad to see they had an isolation infirmary....important consideration for all parents that!!
Posted by Fraxinus at 17:15 6 comments: 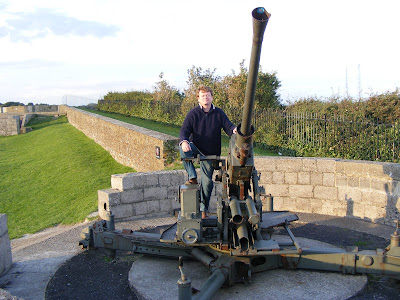 As usual 'life' has taken over the 'hobby' and Blogging so next few weeks will be some 'catchup articles' on visiting historic sites during 2010 especially those with a military nature,stuff to come includes; Forts on the Isle of Wight, Dover Castle, Biggin Hill Air Show, Igtham Mote, Sissinghurst Castle, etc etc etc!

What bit of 'life' has taken all my modelling time  ....well usual family stuff and  a knackered back& neck (on my third form of physio!!) BUT due to the economic climate and being a Funding & Community Development specilaist I have been 'snowed' under with work (The rumours are true I have been locked up in Maidstone Museum .....match funding gap in excess of £1 million......anyone feeling generous?) AND in volunteering in my local community.....Big Society is not new Mr Cameroon!!!! I have been a trustee of 2 charities, forming a new one last year (Switch Youth cafe with a £338,000 lottery grant), chairman of a small allotment association (must catch up with those responsibilities!!) BUT chiefly helping establish and acting as a special advisor to the new Westgate Community Trust (Canterbury) there will be a story on this as its main remit is to save the large community centre in the centre of Canterbury, Kent from demolition by the local council (cost saving apparently). Now the Hall was constructed as a Drill Hall in around 1905 for the Territorial battalions of the 'Buffs' and East Kent Mounted Rifles.....so lots of interesting history and a great community campaign story to relate.

I have started some figure painting again & model building and will add updates when there is something worth seeing!! Read loads of historical fiction.....Low's Viking books are awesome!! and tomorrow I will give an update on 'Mutleys Models' a new shop in Canterbury (yes thats its name!!) Westgate Games and a model show in Ramsgate next weekend!!

There would be some more pictures but 'Browse' does not seem to be cooperating in the 'insert image' feature of this new posting, one pic and it's gone 'kaput' !!!
Posted by Fraxinus at 23:49 7 comments:
Labels: life
Newer Posts Older Posts Home
Subscribe to: Posts (Atom)