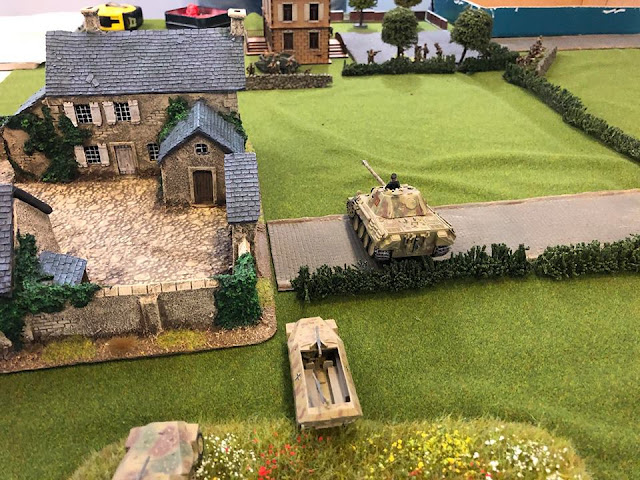 Well for only the third time ever I have attended a Wargames club meeting ! This was my second visit to the ever accommodating Deal Society who are a very friendly bunch , the last time I visited was about 18 months ago, so not exactly a regular! I would be if I wasn't so knackered after a long day at school. Adrian White hosted a game of 'Rapid Fire' as umpire for me and Mark to play I luckily also had Kevin from the club on my side who had played a game of 'Rapid Fire' before, so I have to confess to having an advantage which helped with the end result. 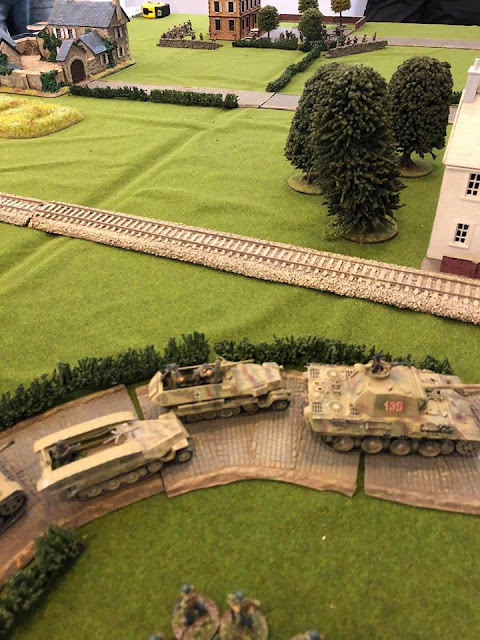 The elite 9th SS Panzer division had to capture a British held (or I should say Scottish) held chateau, I did plead for a special bagpipe dice bonus rule....but alas to no avail. I was a little concerned about 'Harry Huns' two jolly Panthers versus my 3 Churchill's! The British Set Up included ; 4 companies of infantry , over half of which were dug in around the Chateau, 5 Bren Gun Carriers, 3 Churchill's, one 6 Pounder AT, a 2 and a 3 inch mortar, Vickers MG and rather importantly two off table 25 Pounders. The German set up included; 2 Panthers, a Flammpanzer 111, a Hanomag Sd.kfz 251  with a Pak gun, 4 other Sd.kfz 251's, a heavy Mortar plus a number of elite Infantry squads equipped with Panzerfausts and a Flamethrower. The Germans were classed as elite The Brits as standard infantry. 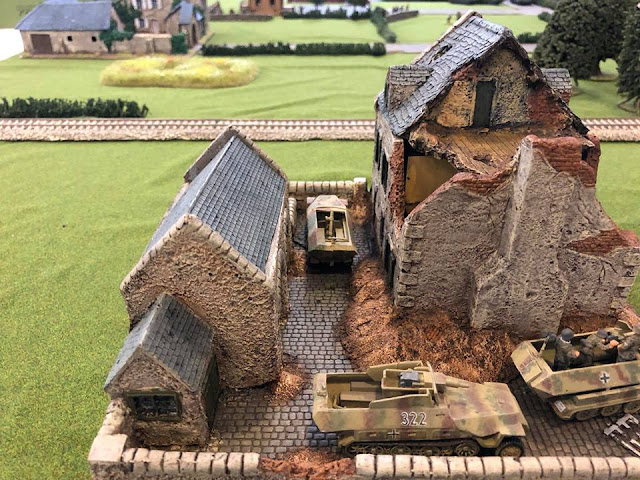 The British Victory conditions were to take two settlements or destroy half of the German forces, the Germans had to take the British held Chateau or loose half their forces. The Brits won initiative and advanced towards the settlement on their left wing driving up the road with 2 Churchill's with a Bren Carrier in the lead, the rest advanced on the other side of the hedge in the same direction, The troops dug in at the Chateau received the 6 Pounder in support of their position which was also HQ's base. Smoke gave cover on the advance up the road . The Germans sent a Panther up the road to the first British Objective (the white houses) and advanced men and Flammpanzer in support around the objective via the wooded area. The rest of the German battlegroup advanced to the Railway line. 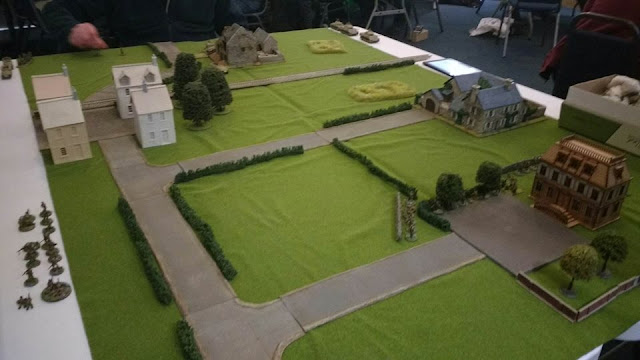 No shooting after the first round but as soon as the smoke cleared the Brits got their forward observers and carriers to the white buildings of their objective and occupied them, British infantry moved to their right flank as well to occupy the large farm on the right. The 6 Pounder hit one German half-track crossing the Railway line. The Germans carried on their advance to the edge of the white houses the Panther in the middle of the crossroads traded shot with three  Churchill's with no result and a British Carrier was damaged. 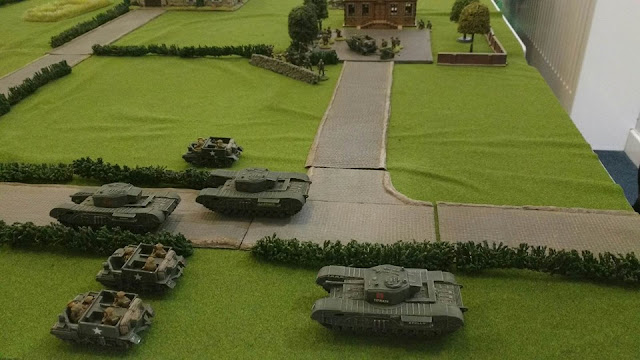 Then Total Madness broke out, one brave and foolhardy Churchill Tank Commander went ' head to head' with the nasty Panther the other two Churchill's 'bunked out' and went cross country, damaging the Flammpanzer which had 'brewed up' a carrier. The other Panther and attendant half-tracks had reached the farmhouse objective after knocking out the 6 pounder and its crew with magical '6' dice rolls. 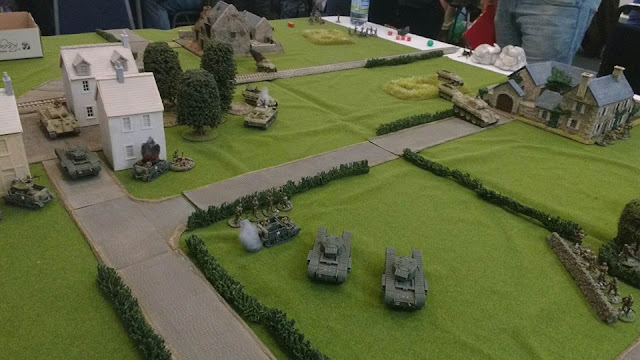 At this point the German forces were doing rather well, the Brits were rolling (well me entirely) awful '1's at key moments with 25 Pounder 'Stonks' on the 'Jerry' held woodland failing to even burst an eardrum and thats when the radio communications worked! The Churchill fired at point blank with the Panther knowing it was a one chance or out scenario....rolled a '4' missed and no effect ! gulp. The Panther fired rolling a two! ....Churchill armour is thick its only saving grace.....the tank received only light damage and soiled 'kacks' for the crew! 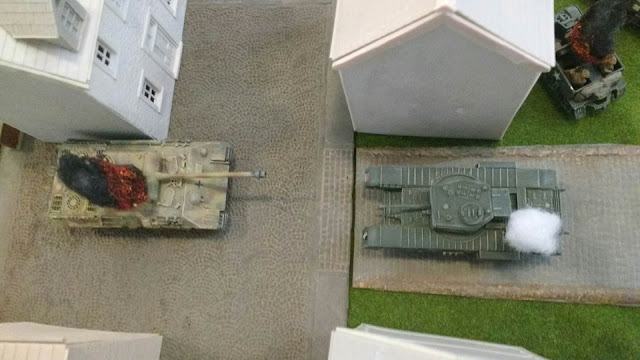 Now most sane tank men would take the decision to beetle off in reverse around a building for cover thanking their lucky stars, changing underwear and swigging from the RTR hip flask...not our brave boys.....it was stay put and fire, The other Churchill's advanced to the hedge line engaging with the Pak armed half-track, The Germans occupied the Farm on the British Right Wing and saw the occupying Brits off who left through the back door for the Chateau.....it was even more looking like a German victory......and then the unthinkable happened I managed to roll a decent dice and the Churchill hit and destroyed the Panther in the white houses, the other Panther supporting the other attack poised to smash into the entrenched chateau troops failed its morale throw and hit reverse gear with much roaring from the 'Maybach' engine' 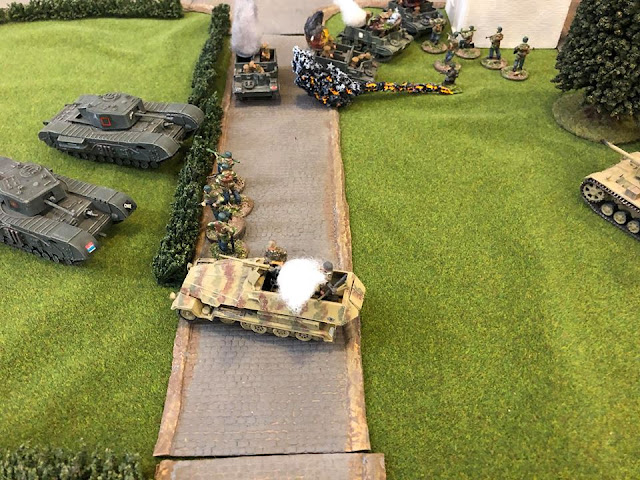 The German infantry at the white houses had some success 'flaming' a 2 inch mortar crew and most of the Bren Carriers, this was not a battle to be a Bren Carrier driver. However eventually the Flammpanzer after being damaged was knocked out by a Churchill in a complete 'flamer' and the Pak armed half track and infantry were pretty much mopped up by the British tank machine guns and main armament. 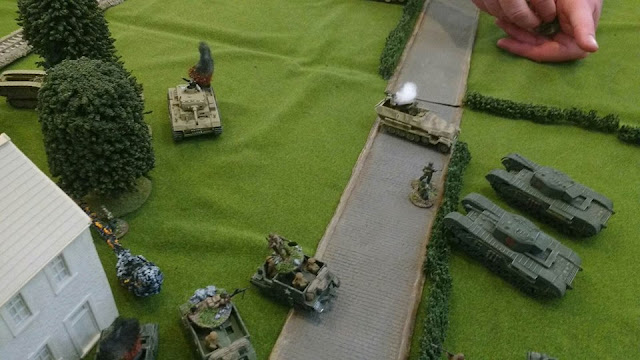 So half way through the game which lasted 9 moves of the 12 , both Kevin and I were not keen to do the dice rolling, not wanting to let each other down, by the end our luck had changed and the coup de grace was the rolling of '6's on a 25 Pounder 'stonk' into the German held farmhouse where massive casualties convinced the German commander all was finally lost as he was a gnats whisker from 50% casualties. 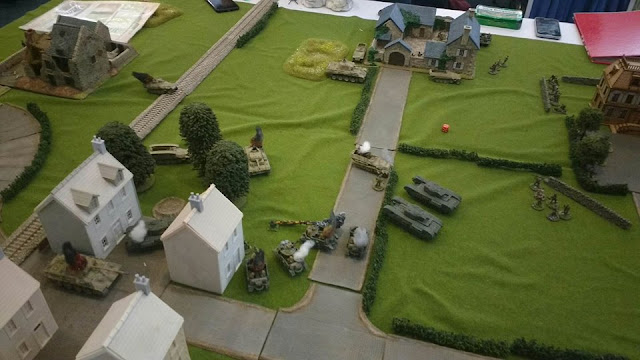 So a good victory for the Brits and much wound licking for 'Jerry' ....an interesting scenario which Adrian has played before and this was the first Victory out of three games the other two being draws. Is it a balanced game...definitely the assistance of the 'off table' artillery helped victory, I benefited from being a team where as Mark was the lone German player, the game was very enjoyable due to Adrian's encyclopedic knowledge of the rules (I hate reading rule-books, like the pretty pictures ...but reading the writing uh oh) plus he supplied everything apart from the infantry which were Marks superb masterpieces. A box of his 20mm work is shown below the figures used in this game. 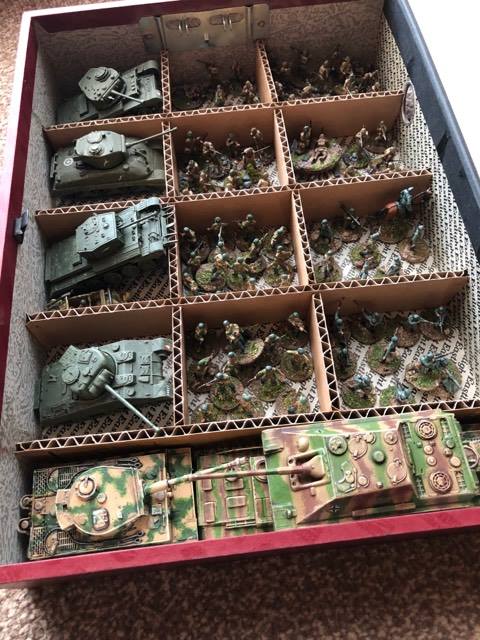 Now to re dress the balance , this was my second game this year as I had been well and truly 'thumped' at 'Travel Battle' which Mark won at the convivial  'Thomas Tallis' micro pub in Canterbury 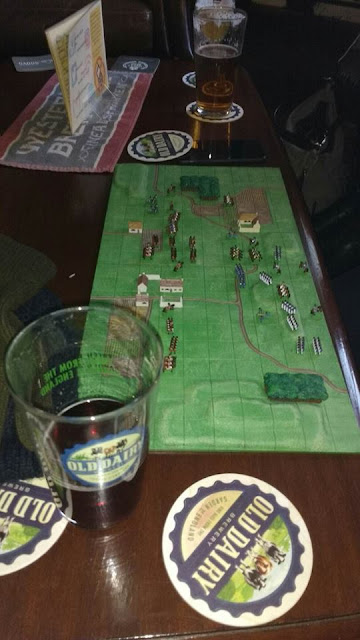 I could plead intoxication after a few jars of real ale but really it was bad play on my left wing which lost me the battle so no excuses! Again although I have a set its not been painted like Marks example above and below which makes the game visually look a lot better.

There will be an update on painting projects soon, but now time for family stuff coming up to Easter and what looks like decent warm weather!!! 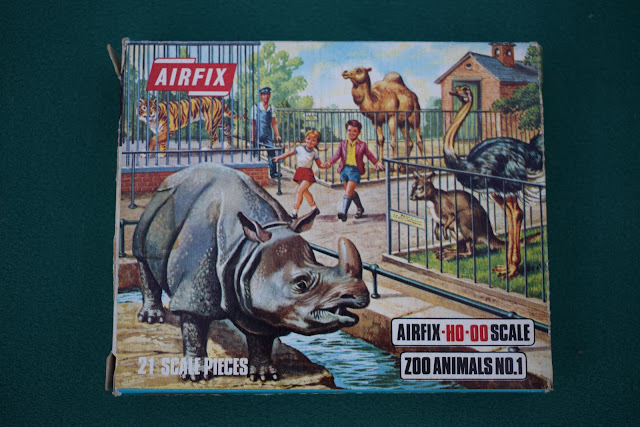 Again missed Salute....venue, poor lighting, scrum at trade stands, travel costs, ancient mothers appointment with the consultant all led to yet another non visit. I also have been making too many purchases online as I have been re-energised in the hobby by starting a late Bolt Action WW2 US Army. This will be the subject of the next post, but in a similar fashion to Marvin on Suburban Militarism and his Uniforms of the British Army Cigarette card posts, linking 'painting' posts, I am going to do something similar but with box's of vintage plastic figures. 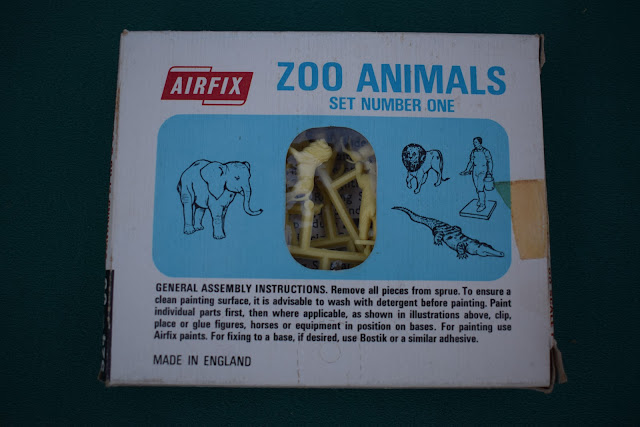 The First is not warlike at all! In fact a set I never had as a child but one with a complete charm of its own, Zoo Animals No1 . This I spied recently in a specialist toy antique shop 'Hidden Treasures'  in Birchington in darkest deepest East Kent. Now this shop is not the cheapest purveyor of model kits and wargames type figures but occasionally a few gems turn up like these! Courtesy I believe of a reclusive collector who would buy many boxes/packets of a single subject when released in the 60's and 70's. I wonder how many similar stashes are out there?!!! 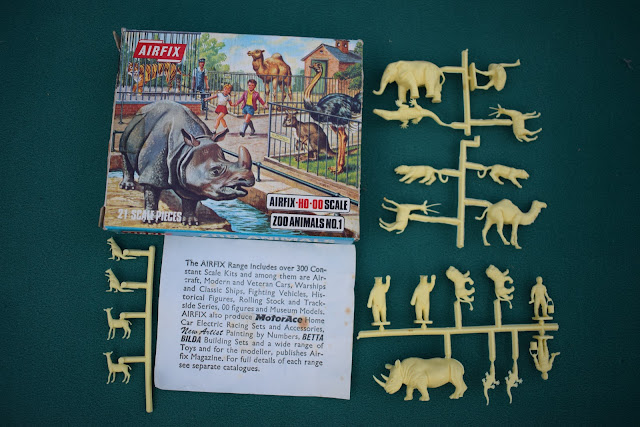 The fellow calls in to the shop on an occasional basis with the latest gems...which have included three show-jumper figures (Rather rare, box art looks like princess Anne) half a dozen Halifax bombers in 2nd boxing and more American War of Independence 'OO' figures still on their sprues in the late 60's type box than you have ever seen in your life(more than any toy shop in the 70's even!) 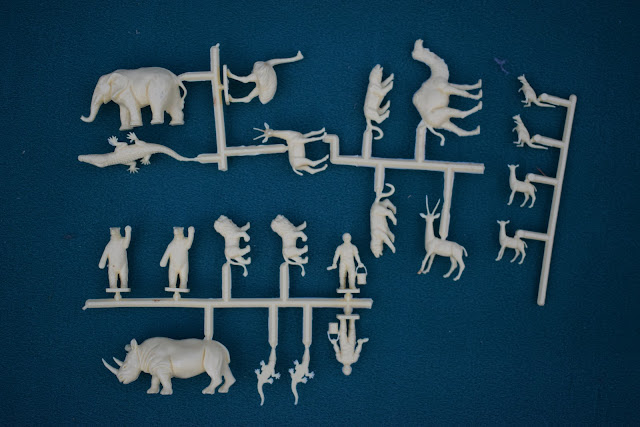 This wonderful set was released in 1966 in that lovely cream plastic Airfix used at the time which I believe they referred to as 'Ivory' . The set contained 21 pieces including two keepers, two baby Kangaroos, an Ostrich, two waving Polar Bears (saying goodbye to the ice perhaps?!) two Lions, Tigers, two deer ?, two Antelope a Rhino, Elephant, Crocodile and a Dromedary. 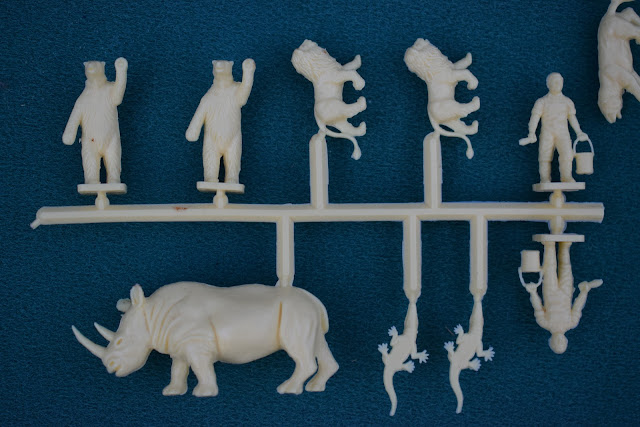 I have come across loose examples of some of the animals in boxes of 'OO' figures in tubs at toy fairs and many of them suffer from 'plastic fatigue' but thankfully these are still 'fresh' on the plastic injection sprue gates and are fine. The artwork is superb and very reminiscent of Ladybird book illustrations of the period and I believe is attributable to Brian Knight who painted the new illustrations for the figure boxes released from 1968 onwards and updated the earlier production sets to make them more appealing. Now the question is who has got a complete set of Zoo Animals No2. I have never seen a set even.
Posted by Fraxinus at 11:32 6 comments:
Newer Posts Older Posts Home
Subscribe to: Posts (Atom)